The goal today was to see the traditional "Changing of the Guard" at Buckingham Palace. To get there, we walked through Hyde Park which was very nice and peaceful. By the time we got there, the place was a mass of tourists lined up all along the streets and around the Queen Victoria memorial. We staked out a spot and proceeded to wait. And wait. And wait some more in the blazing heat. I thought it wasn't supposed to be hot in London?? Finally, the procession started, pageantry at it's finest. 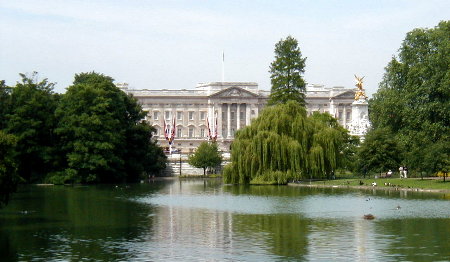 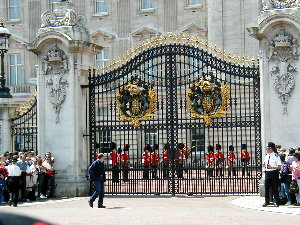 Buckingham Palace. Waiting for the gates to open..... 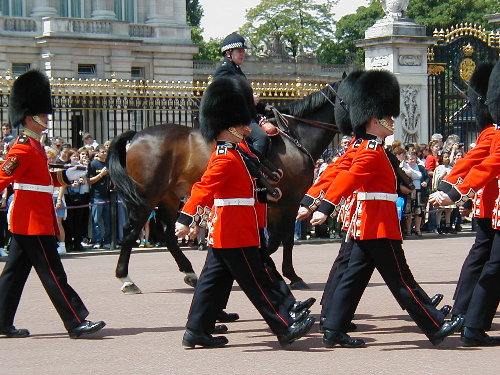 Next we found ourselves at Harrods where we went solely to see the food counters on the bottom floor. If you are any kind of "foodie" this is the place to go. Five large halls are filled with various counters selling every item imaginable, from chocolates, to bread, deli items, fresh fish, meats and vegetables. The ceilings have food themed mosaic tiles that are almost a century old. There are also counters where you can sit and eat, which we did, and had one of the most expensive turkey sandwiches I've ever had in my life. I did go from counter to counter, however, and assembled a picnic lunch for my mother and myself for the next day. At one counter I found some excellent marinated vegetables with olives, at others, thinly sliced smoked salmon, procsuitto, goat cheese, and fresh rolls.
After Harrods, we got in a taxi and went to a photography exhibit of a famous female photographer (whose name escapes me). This was held in a small upstairs gallery, where the photos, which had been blown up to poster size, were in black and white of various dancer's body parts in all their agonizing glory. Muscular dancer's legs with veins and bandaged toes; it was a very forceful exhibit.

That night, while Jessica and Michael went to dinner and a play, my Mother and I had dinner at a lovely restaurant called Clarke's (124 Kensington Church Street 020-7221-9225). The Chef-Owner is a woman named Sally Clarke, who many years ago trained in California at one of the quintessential "California Cuisine" restaurants, Michaels. The influence is clearly seen in her style, no stuffy, heavy, pub food here. What's special about this restaurant is that they have one set menu per day, and that's it. No choices, either you eat it, or you don't eat there. This goes against many an American sensibility, but the place is full every night. The ingredients are all fresh and organic when possible. For example, our main course was "roasted fillet of Scottish wild salmon with girone mushrooms, tarragon, and summer vegetables". We had four courses with coffee and it was 44 BP per person, inclusive of tax. The service was a little uneven, at at one point, it seemed that they had forgotten about us. All was forgiven thought, when we mentioned it to one of the managers who promptly brought us glasses of port to make up for it.


Today encompassed even more touring around London. We began by seeing another photography exhibit, this time a much larger one of Helmut Newton's "Nudes". Many of these photos were larger than life size of totally nude women. I walked away form the exhibit wondering if the man was really sick and twisted and hated women, or revered them. Most likely, a little of both. 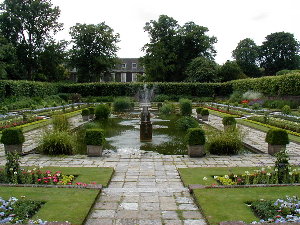 fashions for the last 400 years. The rooms were filled with fashion and design school students doing sketches of the figures and fashions.

At this point we split up and my mother and I walked to Hyde Park, past the Prince Albert Memorial, to Kensington Gardens. We saw the lovely grounds, toured Kensington Palace where Princess Diana used to live, and had tea at The Orangery. The palace was very nice and contains an exhibit of royal dress from 1689 to today. The Orangery was a nice alternative to the stuffy (and expensive) "high tea" offered at places like the Ritz.

We has an excellent, albeit expensive, dinner at a restaurant called Bibendum, in Knightsbridge. It's located in a very interesting building, a former Michelin Tire Garage, that is filled with white tile, giant stained glass windows (of the Michelin Tire man!) and art deco decor. I wish I could remember more of the meal, but after a couple of bottles of wine...it all blurs.