From Trapani, we decided to go to where ever we were going to stay that night and get settled. The we would go back to Erice and Segesta if we had time. On our way to Baglio Fontana, we passed Baglio Santa Croce and decided to stop and look, even though we'd be told they had no rooms available. They had one room, with no windows, no view, and a damp in the basement. It was a very nice place, with a beautiful restaurant and gorgeous view, but the rooms in general were tiny. It would have been 45 E per person, per night.

Baglio Fontana is off the main road from Trapani to Palermo in the town of Buseto Palizzolo. We got lost trying to find it, of course. As it turned out, we were the only people staying there that night.  It's really charming and I think we got the best room in the house, number 1, with white washed walls and cobalt blue paint trim. It's obvious that someone has put some effort in here with lots of care taken in choice of decor and furniture. There are beautiful antiques, all dark wood and our room had twenty foot ceilings, a nice bathroom and a balcony overlooking the courtyard. 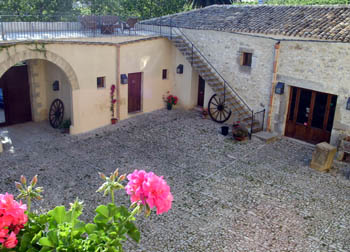 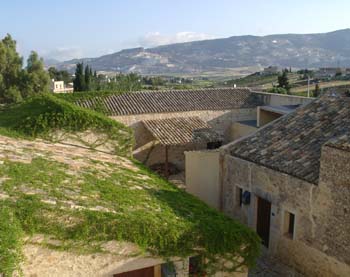 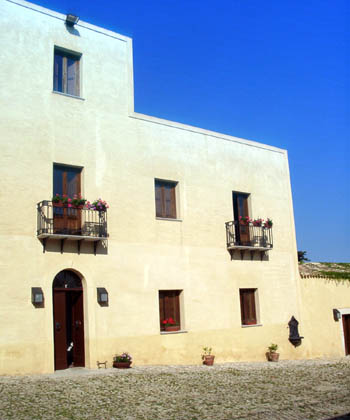 After checking in to Baglio Fontana, we drove back to see the tiny hilltop town of Erice. Despite being perpetually shrouded in the clouds, Erice is a popular destination because it was well preserved it's medieval character. There were quite a few tourists, mostly school kids on a field trip, and we left our first choice restaurant Ulisse, because of the sheer volume coming from the hundred or so 13 year olds having lunch there. Instead, we ate at Ristorante Monte S. Giuliano where we had a very nice meal of Prosciutto e mozzarella di buffalo, Involotini melanzana (rolled eggplant stuffed with ricotta), cous cous di peche, and bisteca de agnello (lamb). With a half carafe of wine and bottle of water, lunch was 38 Euro. After lunch we walked up to see the Norman castle which was built on top of an ancient Temple of Venus. We found the castle closed and tons more screaming kids playing in the park surrounding it. 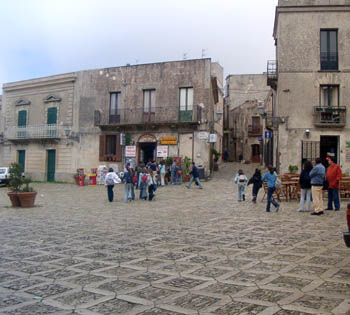 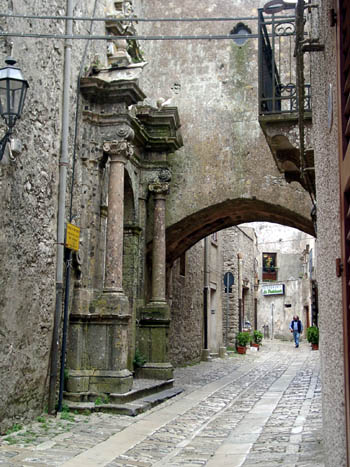 Above, a piazza and street in Erice. 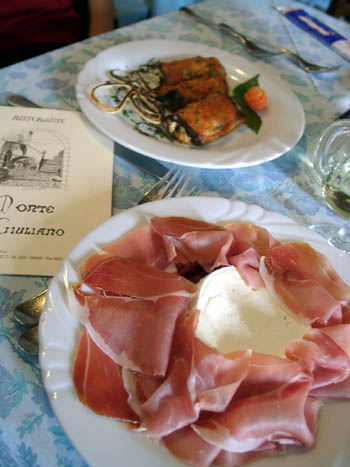 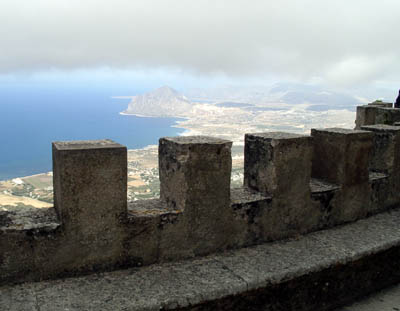 Above, food at Ristorante Monte S. Giuliano and the view from the Castle down to the sea below. 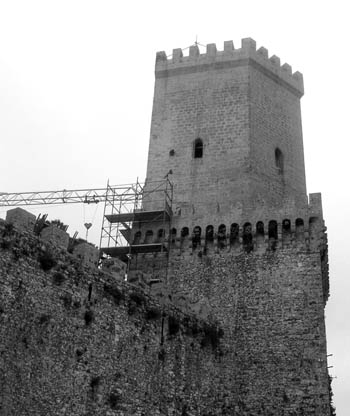 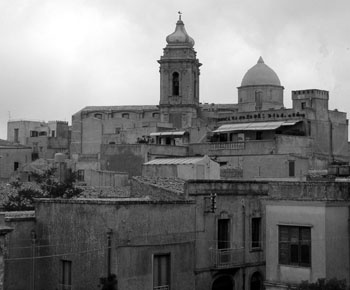 Above, the castle and  rooftops of Erice.

Mid afternoon, we drove back down the hill from Erice and took the autostrada to the Greek ruins of Segesta. It's a nice ruin, and quite a little hike uphill to see the temple. When we got to the top, we found that the kids had followed us there. Tired, we chose not to go up to see the theater which was up another hill. We drove back to Baglio Fontana after fruitless search for batteries. As it turned out, we were the only people there for dinner, a slight disappointment. The food was mediocre, but I enjoyed trying to speak Italian with the manager who spoke no English. 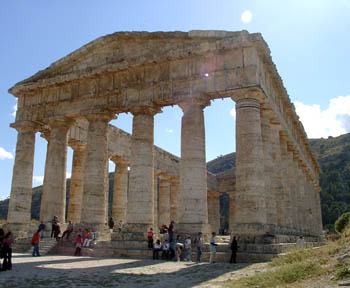 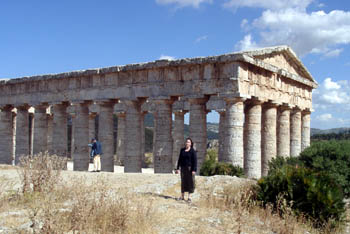 The Temple of Segesta

If you have comments or suggestions,
email us!