After a decent buffet breakfast at the Villa Athena, we left fairly early, intent on getting to Selinunte before lunch. On the way, we  decided to stop in Sciacca just to see the the town which the guidebooks had mentioned was quite nice. We parked outside the old town area on the steet in a space governed by one of those machines in which you need to buy a ticket and place it on your car. Only the machine didn't work. Unsure as to what to do or where to pay, we just walked away.
Sciacca is a nice town, pretty, and on the coast. We walked around for about an hour, checking out the various churches 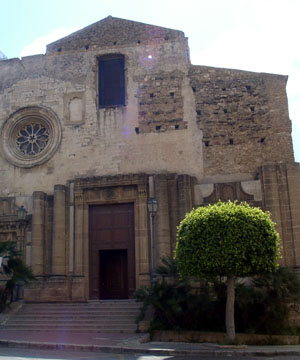 and piazzas filled with chatting old men. When we got back  to the car we had a ticket ( only in Italian of course) on the window. Unsure once again about what to do, we attempted to ask a women passing by. She didn't speak English, but she pointed us in the general direction of the main piazza and said something about a box. I asked her how much it would cost and she said "about fifty". Horrified, my mother insisted that we pay the ticket, fearful that it might show up on later on her credit card as they had the liscence number of the car. We thought we had to find the police station in the Piazza,  so we set off in seach of it, even thought it's not on the only only map we had in the guidebook.
Of course, we got lost again and drove in circles for almost half an hour. Through, outside and around the town, back inside, and completely lost, driving in circles on streets barely wider than the car (are you starting to see a theme here?). Completely frustrated, I made my mother pull the car over and I went into a tailor's shop and tried to ask for help. No one we asked could speak English and my Italian just isn't good enough. Finally, he asked another shop keeper, and a friend of hers jumped in his car and told us to follow him to the Piazza. Off we went in persuit of a stranger's car! He took us though narrower streets than before, but if he could fit so could we. He arrived at the Piazza and waved us in. 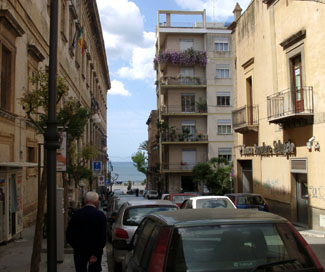 Yes, that's where I had seen the police station when we walked past before! We went inside and initailly couldn't find anyone. Finally, we found an officer, who didn't speak English, but conveyed to us that we were in the wrong place. He took us through his office and out onto a balcony and pointed us to a koisk in the parking lot. A light bulb went off in my head. "So that's what she meant when she said something about a box!"  We walked outside, still confused and headed over to the kiosk. We knocked on the door and handed the gentleman inside the ticket, nervously awaiting the damage. One Euro, he said, and then he gave us thirty cents change.  We just started to laugh...all that panic for less than one euro....
As it turns out, what we'd thought was a parking ticket was really a reminder to go and pay, otherwise it might have turned into a ticket later, if we'd failed to pay. When the lady on the street had said "fifty", she'd meant fifty euro cents, not fifty euro! Lesson learned. If you should find yourself in a similar situation with a broken parking ticket machine, go to the nearest shop, usually a tabacccaio, where they will sell you a ticket.

Once on our way out of Sciacca, we realized it was time for lunch and decided to try and find a place in Porto Paolo that had been recommended to me by another Fodor's message board poster. We got off the main highway and followed the signs along progressively smaller and smaller roads to the beach at Porto Paolo. Finally, we spotted a sign for the restaurant, Da Vittorio! Up we went what looked like a private driveway and followed it to the end where we found the restaurant at the end. We walked in shortly after 12:30 and there were only a few other people dining on the patio and inside. 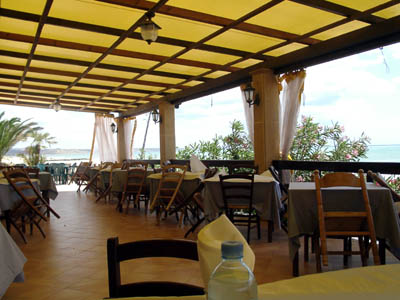 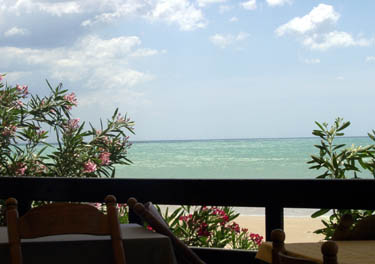 We sat down and asked for a menu. The waitress explained to us, in Italian, that there wasn't a menu, just a set lunch. 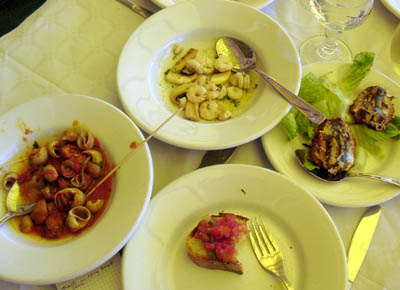 Aware this might be the case, we said, "bring it on!"  Shortly, the plates started arriving at the table. First was a tomato bruschetta, followed quickly by garlic and olive oil marinated mushrooms and tiny bay shrimp. Next came snails in a spicy tomato sauce and grilled, stuffed swordfish. The fifth and final dish of our antipasti was spadola, a white fish with silvery skin and mild flavor served with carmelized onions and a sweet and sour sauce.

Soon, the next course arrived, a fruitti di mare pasta filled with clams, mussels, and shrimp in a garlic and olive oil sauce with a hint of chili flake. The pasta was a perfect al dente. At this point, we had no idea how much more food was coming and were were starting to try and pace ourselves. But there was more to come, and we were next brought a mixed grill fish platter with wonderful grilled prawns, slightly overcooked swordfish, and a whole grilled fish called dentesca. The meal was punctuated by not one, but two desserts; a bowl of sliced fruit and a plate of hot, fried popovers, dusted with sugar and filled with fresh ricotta and chocolate. In all, the service was quick and efficient and by the end of our meal the restaurant had filled up with other customers including a lady who hand-fed her little dog pieces of fish at the table. We saw no other non-Italian tourists which made sense given the remote location. When the check came, all of the above, including a bottle of mineral water and 1/2 carafe of house wine came to 60 Euro total. Da Vittorio also rents rooms above the restaurant, overlooking the sea for about 70 Euro a night. The main man in the kitchen is Vittorio himself, gruff on the exterior, complete with torn jeans and a shirt unbuttoned to the navel. Quite the anti-chef.  I poked my head into the kitchen and thanked him personally, and as we walked out to our car he stopped us in the parking lot to chat. Far from the initial impression, he turned out to be a gentle man who was intrigued by the two American women who had come so far just to find his restaurant. 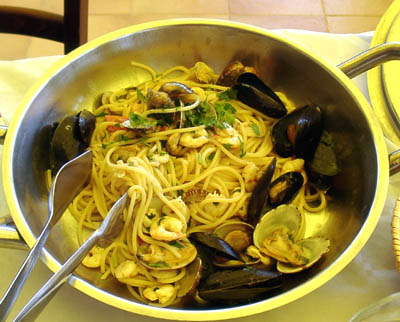 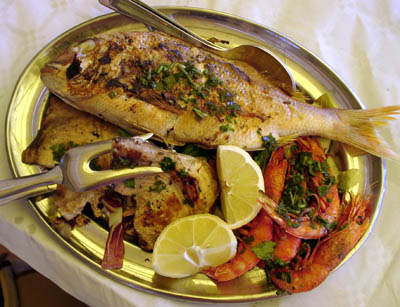 We rolled out of Porto Paolo and on to Selinunte. Selinute turned out to be an enourmous archaelogical park containing several temples in various states of restoratation.  The best restored is called "temple E" which dates back to 480 BC. Unlike Agrigento, it's wide open for visotors to walk among the giant columns. Temple E was restored some time in the 1960's and is considered one of the finest examples of Doric architecture in Sicily. To get an idea of the sheer size, take a look at the picure below on the left. In the picture, you'll see my Mother walking next to a column in the bottom right of the photo. 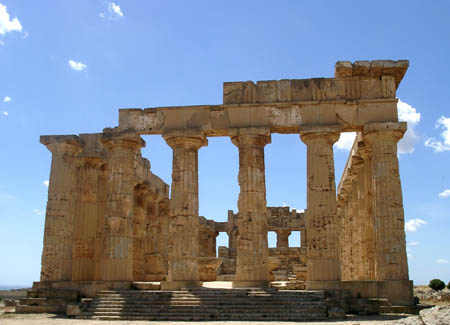 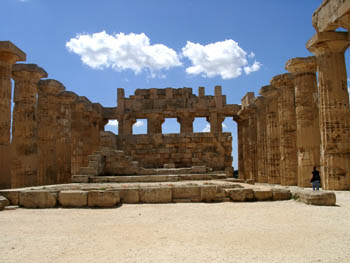 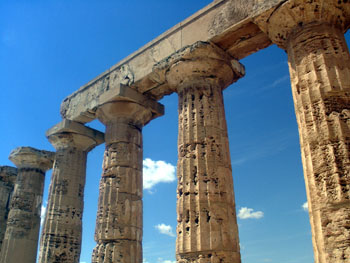 Across a river and up on a cliff overlooking the sea is the Acroplolis. It was far anough away from the other temples that we drove out car over to the parking area on that side. The temple of the Acropolis itself was under scaffolding and not as impressive as Temple E in my opinion. However, this is the temple pictured on the entrance ticket to every archaeological site in Sicily (see top of page). 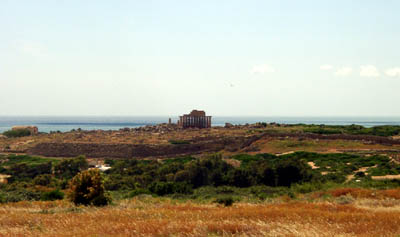 From Selinute, we headed toward Marsala intent on finding a place to spend the night. Along the way, we stopped and looked for a place called Baglio Spano which I had read about on the interent. After driving down a few dirt roads bordering vineyards, we found it, completely deserted and not well kept. We left and drove to Marsala proper, sure that we'd find something in town, though the Lonely Planet guidebook was sparse on details. We parked and walked into the old center of town which is closed to cars. Marsala is a charming little town and we quickly found the tourist infomation office intent on finding a map and list of hotels. What we found instead shocked us. There are no hotels in the old quarter, not one. We called to another Baglio (restored farmhouse) and they were full. There was a nice hotel down by the water, but they were $260 a night. The closest place to the center was the "modern" (as in 1980 modern) Hotel President $116. On the way there we drove by a place called B&B Figuccia which looked like it was in a concrete apartment block. At the Hotel President we had to try three rooms before we found one with a bed that wasn't mushy. The final choice turned out to be a nicer room in new wing.  It was a huge room with a big bathroom and a horrible view of a fire escape and back alley. The place had no charm and was empty save for a bus load of tourists and some businessmen. However, we were tired and it would have to do. The conceierge was very nice and recommended Trattoria Garobaldi for dinner. 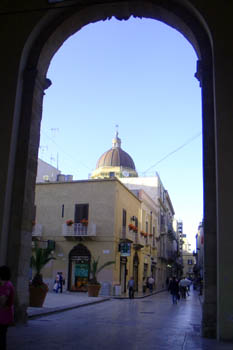 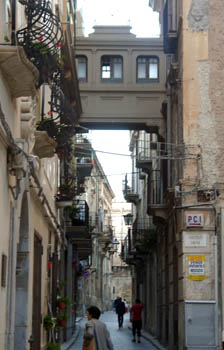 Back into the center of Marsalsa to walk around before dinner. We parked in a free lot at the end of Via Scipione l' Africano, a street which goes to the Porta Garibaldi, an archway that leads directly into the center of the old town. On the way up Via Scipione, we stopped at Enoteca Vini & Sapori to taste some Marsala wine and my Mother bought a beautiful bottle of dessert wine. Once inside the center, we stopped at another enoteca and I bought a packet of bottarga, dried tuna roe often used on pastas. After walking around the town for a while, it seemed like there weren't too many restaurants,  so went to the Garabaldi even thought the menu seemed a little "touristy".  The food turned out to be very simple, but well prepared. One caveat though, the antipasti buffet look like it was sitting there from lunch. The waiter was very nice and when we ordered a 1/2 bottle of Corso Red he bought us some really nice red wine glasses to use. The grilled steak was very thin, but perfectly cooked. The pasta with eggplant was good. When we cancled our salad because it never came, we apparently started WW3 in the kitchen. There was quite a bit of yelling and banging of pots. When we went to pay the check we had to explain a that they had left a dish off the check. Still, it was only 25E for dinner, really not so bad. 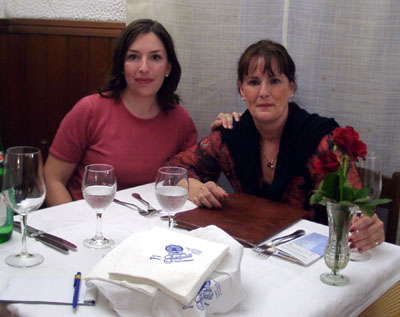