"Left! Pothole on the left! Go right, right! Watch out!". This is what I'd been reduced to, calling out directions, trying to keep my mother from plunging us off the road or into a pot hole larger than our little car.
We has set out a little late this morning to drive to Regaleali and promptly got lost as soon as we crossed back over the main 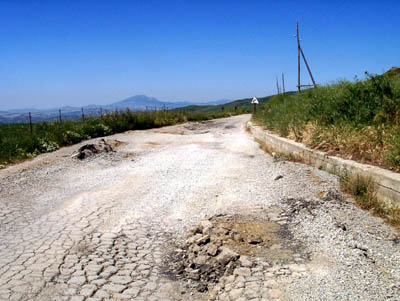 highway.  Italian road signs are a mess, usually with conflicting information. My mother was driving and I acted as navigator which is not a bad role if you have decent road signs that correspond with a map. Unfortunately, the map, while highly detailed, was of little use where we were at that moment. I looked at the map and said, "Just as long as we don't take that dotted line road". It wasn't long before I figured out that were we on the dotted line road. It turned out to have very little pavement and potholes that reminded me of Cambodia. The road seemed to be under (re)construction. Thank God for the occasional signs for Regaleali pointing us along the way or we would still be wandering in those mountains today. We saw very few cars along that route, which took us over the top of a couple of small mountain ranges. When we did see people, they looked at us with curiosity and amusement. They were all coming from the other direction and I keep expecting them to scream "Go back!" at us from the car window.  I'm sure the rental car company wouldn't have been happy with us taking that road.
Arriving at the winery, we discovered we were still in the wrong place. As we drove in two men, working outside on the grounds, actually stopped working, leaned on their shovels and stared at us. They watched as we drove in, walked around and drove out. Obviously, they had nothing better to do. At the winery we were told we had to go to the Casa Vecchie, where we would meet Anna Tasca Lanza who was expecting us.

We arrived at noon, late and a bit road weary. The morning's cooking class was almost over, but we were met with great warmth and hospitality by Anna Tasca Lanza. Anna offered us the chance to step right into the class with two other women from New Jersey who were there to do a five day class.
As soon as we arrived, we were given gift bags containing a spiral notebook for taking notes, a pen, a 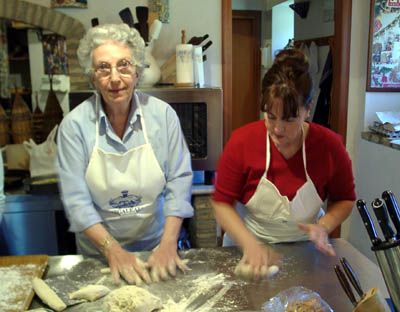 small booklet listing the Regaleali wines, a t shirt, towel and an apron all bearing the Regaleali logo. It was a very professional, thoughtful touch. The kitchen was clean and bright and obviously created for cooking classes. Anna had three assistants to help her with the prep and clean up. Today's class had focused on "doughs" and we watched she kneaded the dough for doughnuts and showed us what they had done earlier, a foccacia and a very deep dish pizza with a smoked cheese, both baked in springform pans. 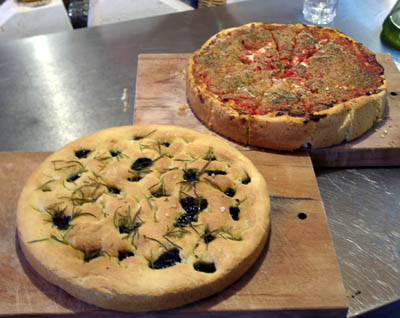 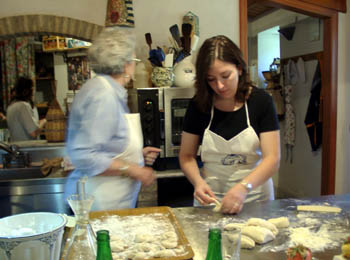 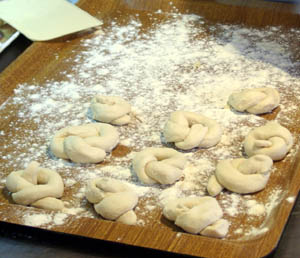 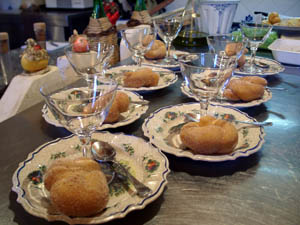 We each got a turn at rolling out the doughnuts and then were given an aperitif of chilled of Regaleali Bianco and some tiny roasted peppers stuffed with anchovies, capers and olives. The four of us students, Anna, her husband Vances, and her sister Costanza, sat down for a lunch of the pizza, focaccia, some amazing sautéed spinach and lovely salad of tossed greens and vinaigrette served with the Regaleali Rosè.
Dessert was the freshly fried doughnuts, rolled in cinnamon sugar. They were served with strawberry granita and the combination of the warm doughnuts and sweet/tart granita was astounding. The entire experience was oh so civilized, and quite a contrast to our disorganized cooking class at Gangivecchio.

Our room turned out to be a small suite of rooms with a sitting area and two bathrooms and three bedrooms. The house itself is basically a square with a large central courtyard. It's surrounded with vineyards and down below the house is a chicken coop and a large vegetable garden. 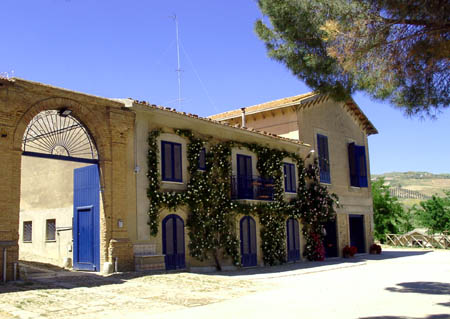 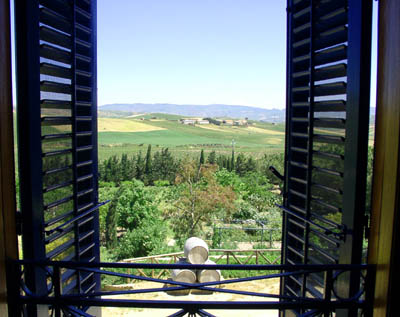 Above, our room was upstairs on the far right and came with a stunning view.... 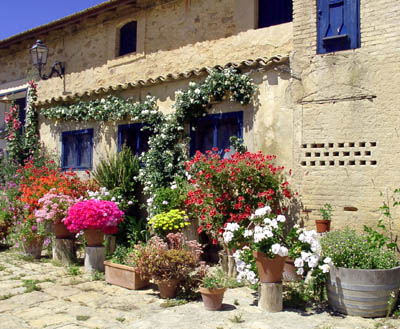 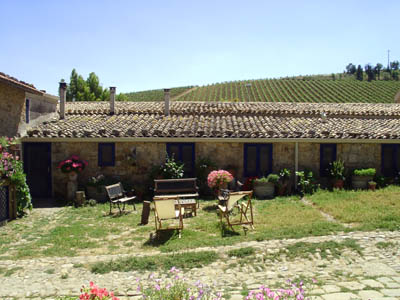 Above, inside the central courtyard. Our cooking lessons took place in the kitchen at the right.

In the late afternoon we were taken back to the winery for a private tour by Vences, Anna's husband. He was very thorough, taking us all over the winery which produces almost 2.5 million bottles a year. 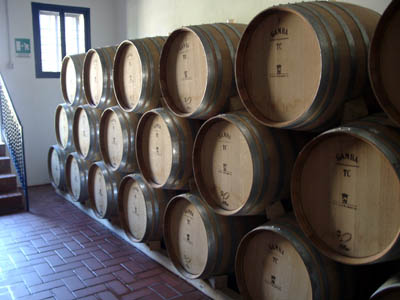 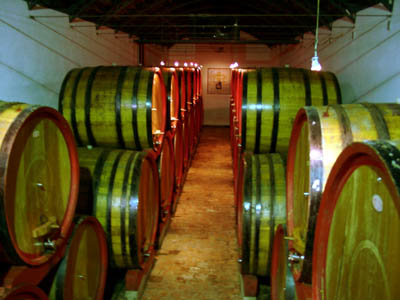 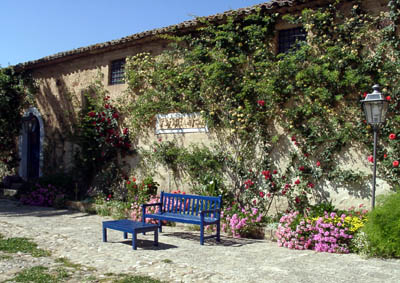 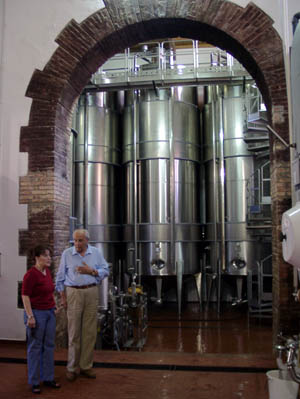 Above, the courtyard at the Regaleali Winery, and right, inside the winery with Vences and my mother. 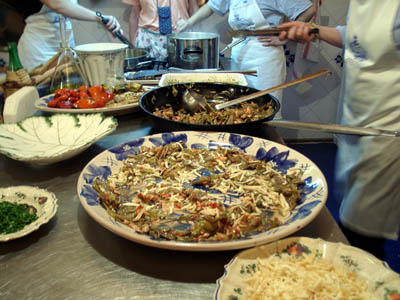 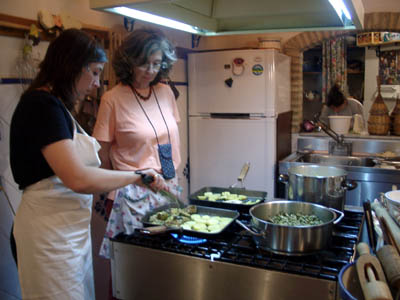 Above, preparing the Pasta con Tonno and at right, Kristina, the Grill Queen reigns again.
Below, the Cassatina. 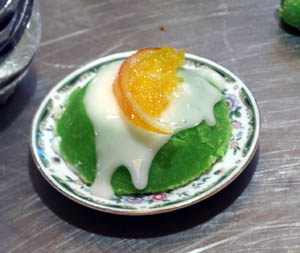 For our dinner lesson we prepared about 10 pounds of baby artichokes which had been purchased earlier in the day in town. Each artichoke had to be pared down with a knife, choke cut out and quartered. We all sat around in a circle and cut artichokes. I could almost imagine us in another time, the women of the household preparing the meal, gossiping about children and husbands.
The artichokes were then sautéed in olive oil and garlic. Next, canned tuna (in olive oil) and canned tomatoes were added. Finally, a generous portion of grated peccorino cheese was tossed in right before the cooked pasta. Along with the pasta we had a huge platter of grilled peppers, eggplant, zucchini, and more artichokes. Dessert was a cassatina, a little cassata. This was freshly baked sponge cake, layered with fresh ricotta and covered with homemade marzipan, icing and a slice of candied orange. The wine served with dinner was the Regaleali Rosso, a blend of the Sicilian grape Nero d' Avola and Merlot. It was fantastic. During dinner I sat next to Vances and we talked about his youth. He told us fascinating stories about growing up with his mother being Spanish royalty and his father Sicilian nobility (hence his title of "Count"). 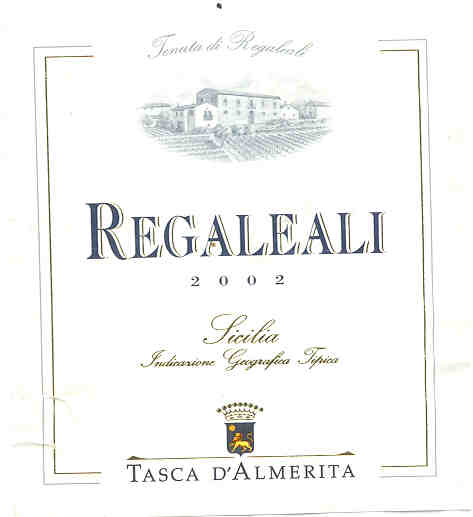