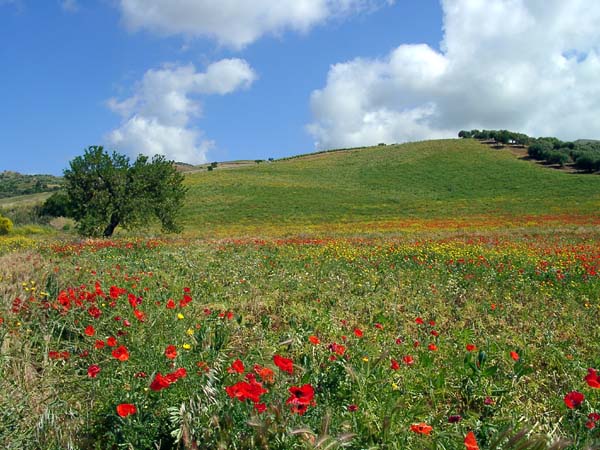 In the morning, we rode into town with Vances on his daily trip to buy the newspaper so that we could go to the cheese shop where Anna buys the dry sheep's milk peccorino we had last night with the pasta. I bought a wedge weighing about a kilo that only cost 2.9 euro as a gift for David, lover of all cheeses. The town of Vallelunga Pratamiento still seemed to be sleeping at eight in the morning, in fact the cheese/butcher shop was still setting up for the day. The photos below are from the street where Vances buys his daily paper. 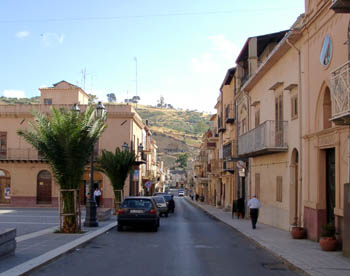 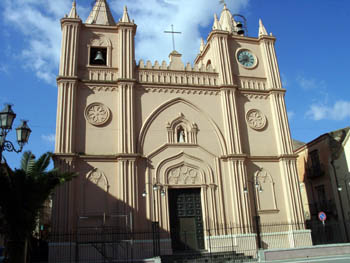 Back at the house we had a lovely breakfast and then a short break before the lunch cooking lesson. My mother and I took a quick drive back toward a field we had seen on the way in, awash in wild flowers (see the photo at the top of the page and below). We have been blessed with beautiful weather so far, and because it is late spring, wildflowers are blooming everywhere. 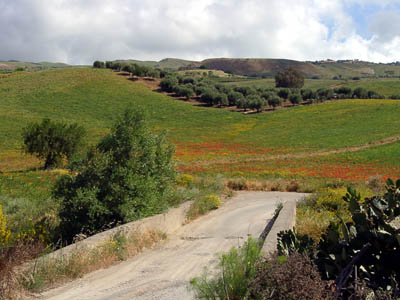 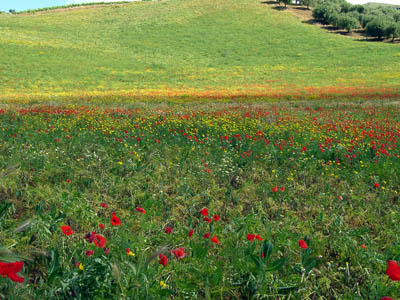 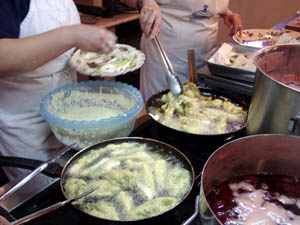 The morning class started around 10:30 and included various fried foods including batter dipped vegetables, arancini, panelli, and for desert, canolli. We also cleaned 20 flats of fresh strawberries to make strawberry jam.
Arancini are rice balls, usually filled with something and then fried. For these, we made the risotto first, allowed it to cool a bit, and then rolled the risotto around a ragù made with an assortment of meats including prosciutto, salami, shredded chicken, and ground veal. The ragù had estratto, as well as some smoked cheese and a sort of tomato-beschamel sauce. Arancini means "little oranges" which these balls look like after they are fried. 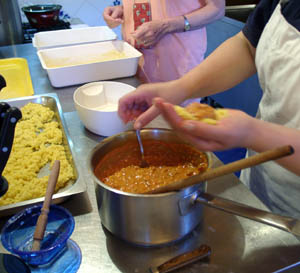 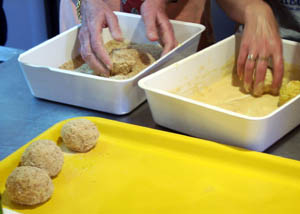 Panelli are "fritters" made out of fried chickpea (garbanzo bean) dough. 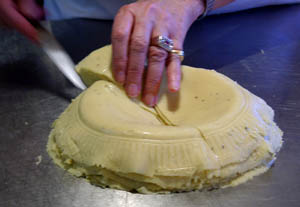 The chickpea flour is cooked in water, whisked until a very thick paste forms. Then it is spread thinly onto the back of a plate and allowed to cool to where it becomes rubbery. It's then cut into pie shaped wedges and fried until crisp. These little wedges, when served hot and salted are a great appetizer. They are also commonly sold as street food, served in a sandwich, in Palermo. (Note: since returning home, we have made these twice for dinner parties and they have been a great hit, disappearing as soon as they hit the platter. They also go well with various dips like hoummous, tatziki, and artichoke pesto.) 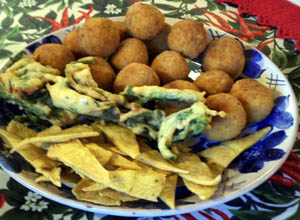 We had made the Cannoli dough the night before and today Anna put the dough through a pasta machine. 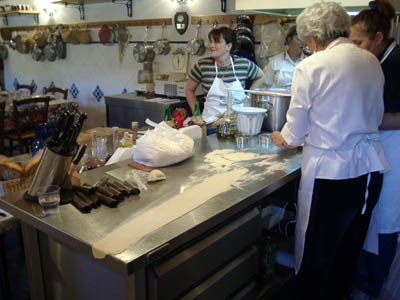 It was then rolled around metal canolli tubes and fried. The filling,  madewith fresh ricotta, chopped chocolate, and candied citrus, was lightly sweetened with sugar.

After lunch, my mother went to pay Anna for our time there, and it was then that we discovered she did not take credit cards. Off we went, back into town to find an ATM, driven by one of the farm workers. Once at the ATM, we dissevered that my Mother's card was not working and I had to stand there, withdrawing the maximum a few times, praying that it would not cut me off for the day. The entire experience was mortifying and nerve-wracking, but we survived, with 25 E to spare between the two of us. Back to Regaleali, where we paid up and bought Anna's book, The Flavors of Sicily, which she graciously signed for us.