I slept well, aided by the sheer exhaustion of the previous day and the wine. Of course, 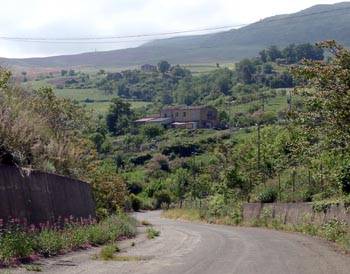 I did wake up at 5 AM, shortly before sunrise. Breakfast was at 8:30 AM and was simply coffee, toasted bread and homemade cake. We knew we had until 10:30 for our cooking lesson, so we took another walk. There were some great views out along the road and all the brightly colored wildflowers were in bloom. There were fragrant bicolor red and purple sweet peas, bushes of bright yellow flowers, red poppies, and fields of purple flowering hay.

Back at Gangivecchio, we took another walk around the grounds, this time including the exterior and interior courtyards of the abbey. 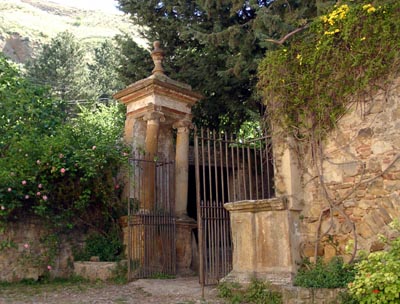 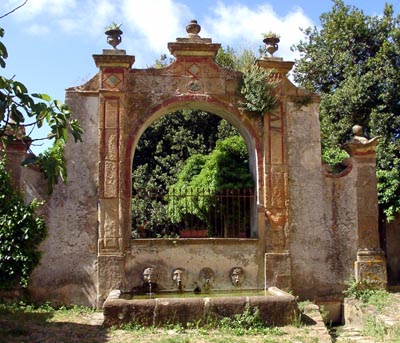 Above photos are from the exterior courtyard of the abbey. 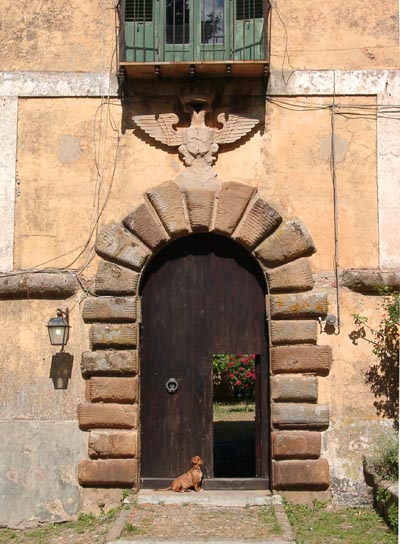 Above, the door leading into the center courtyard.

Below are some photos from the interior courtyard of the abbey. 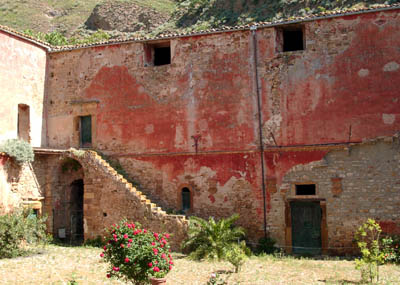 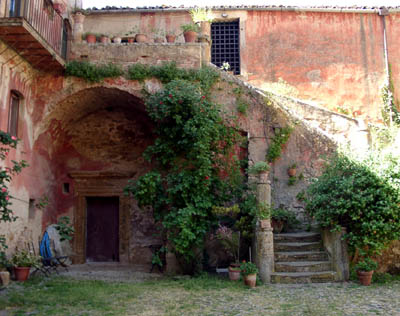 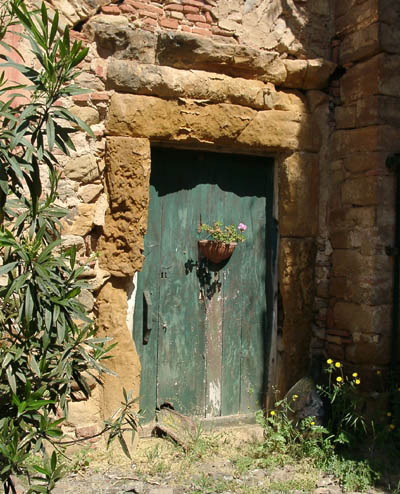 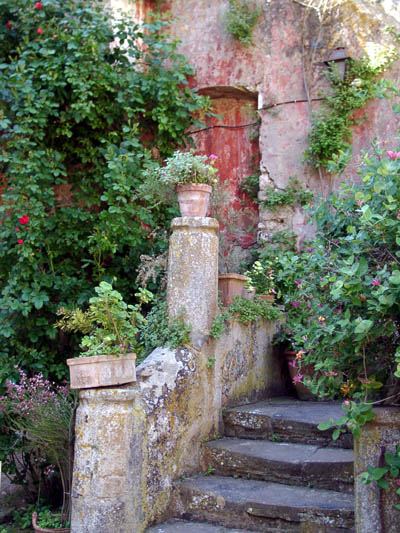 At 10:30 we went upstairs in the abbey to the restaurant which is only open for lunch and is closed on Mondays (today). After a brief tour, we went into the kitchen to cook with Giovanna Tornabene. The kitchen is small, with a single six burner stove in the center and one of the best views I've ever seen from a restaurant kitchen window. Along with us was Caroline Carreno, an accomplished food writer who is assisting the Tornabenes in writing their third cookbook which will focus on pastas. 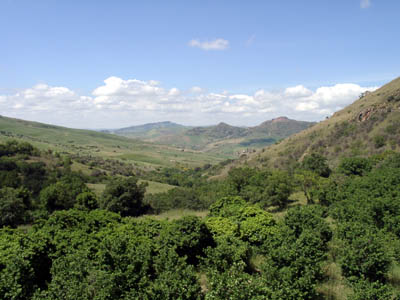 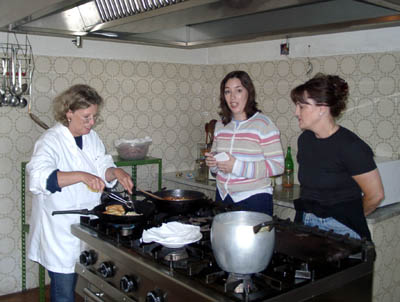 The cooking lesson in the morning started with fried pizza dough topped with a fresh tomato sauce. These were very tasty and would make a nice party appetizer. 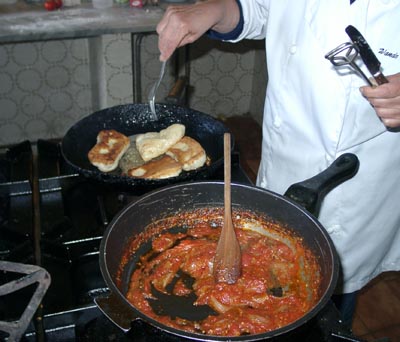 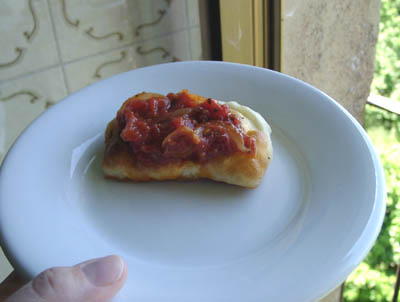 The next dish was the traditional Sicilian pasta alla norma (pasta with eggplant and tomatoes). This was topped with a wonderful ricotta salata, a firm, salted, ricotta cheese.  After the pasta, we made another tomato sauce, this time with estatta, essentially a tomato sauce that has been heavily concentrated by drying in the sun. The resulting estratta is a thick block of a salty tomato paste, tasting similar to sun dried tomatoes.  To this sauce made of estratta, we added Sicilian pork sausages. We took a break and then went back in the afternoon and made cassata al forno, a traditional dessert made with baked fresh ricotta cheese. While interesting, I'd have to say the class was a bit of a disappointment due to a lack of preparation and planning and the similarity of dishes. I had explained in an advance email that I thought we could move beyond tomato sauce and we wound up cooking 3 dishes based in tomato sauce. I would have liked to see some other meat, fish, or vegetable preparations. 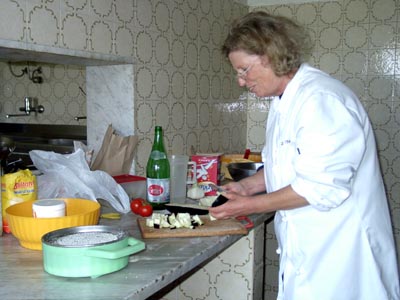 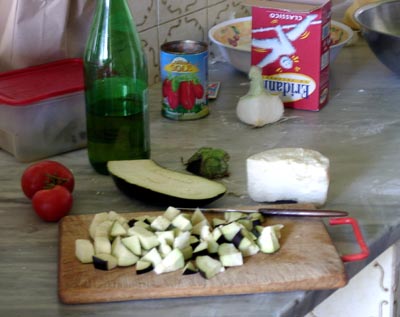 In the afternoon we drove up to the town of Gangi and promptly got lost. Of course, we took the wrong road up. Not the main one, but tiny, successively smaller, cobblestone streets that led up into the heart of this vertical village. At one point I was so afraid we'd get stuck, I had to get out of the car and guide my mother around a curve. When we arrived near the top, we discovered a larger paved road that wound up around the outside of the mountain. How could we have missed it? 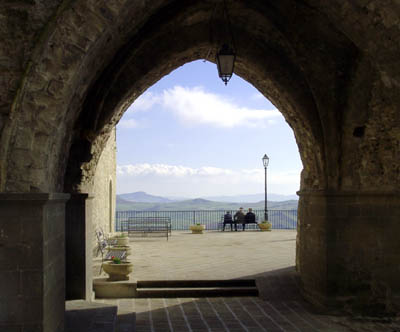 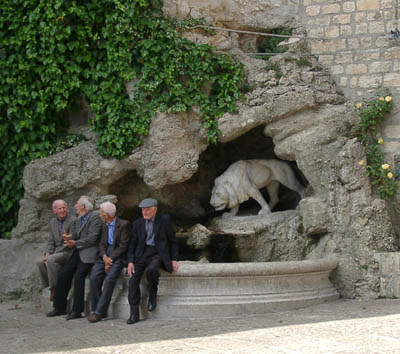 Along the way, we stopped a few times to ask people, "Dovè il centro?" We were met with a stare that mixed suspicion bordering 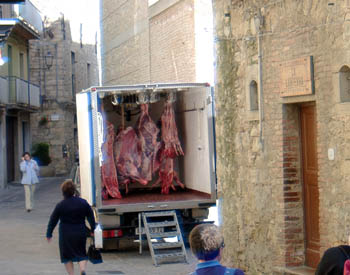 on hostility. It was very odd and I'm not exactly sure why we were considered a threat.  If anything, I'd think they would be laughing at these two crazy women in a tiny car trying to negotiate the streets. To be fair, we did find a few people willing to help us out and point us in the right direction. There were plenty of older men sitting around in the piazzas and on park benches chatting, and as we walked though the center by the main church, we were clearly that day's object of interest. I got the feeling that Gangi is definitely "off the beaten track" as we were obviously the only tourists there and I doubt they get too many. Absent were shops selling trinkets and postcards. There were a few churches, butcher shops, cheese shops and even a store that sold kitchen appliances. Local kids were brought home from school by bus and dropped in the town square. The town is charming in it's own way, but also seems a little sad and lonely. 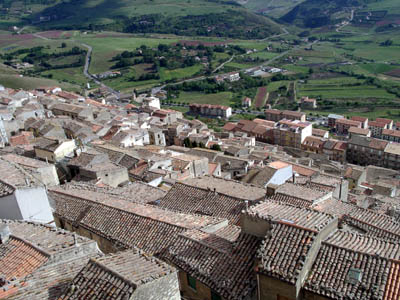 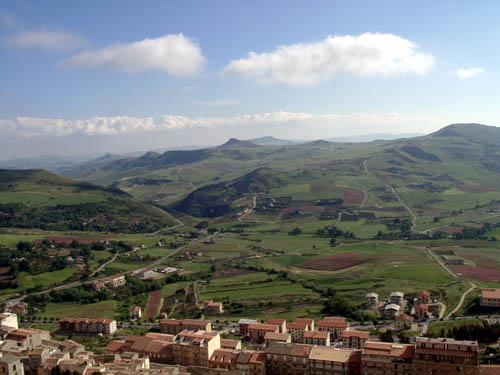 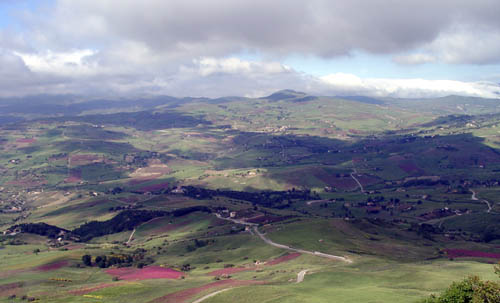 Later that night, we had dinner again in Paolo's restaurant in the inn. These dinners have been the best food here, with his (and his wife's) very innovative take on traditional cuisine. Our first course was a ricotta filled crepe with a bright green, wild fennel sauce. The pasta course were large shells with artichokes, more wild fennel (it's in season here) and parmesan in a creamy sauce. The main course was braised pork served with mashed potatoes. For dessert, we were served the cassata we made that afternoon, while the rest of the restaurant got some sort of chocolate torte.