The one thing you fear most while traveling is losing your passport, right?

The flight from LAX to Atlanta was uneventful, as was the flight from Atlanta to Rome. We took full advantage of being able to use Delta's Crown rooms in both airports, using my mother's United Red Carpet membership which has a reciprocal agreement with Delta. The Crown Rooms all have at least one computer with internet access for those looking for a fix. I wish I could say that Delta's economy class was as nice, but they weren't. Not that I drink on international flights, but I was shocked that they charge for alcoholic drinks. The flight attendant tried to tell me that all the airlines do it now, but I've never been on one that does. Regardless, the couple in front of us managed to have about 6 drinks each and went in search of more in first class when told they'd been cut off. I'd hoped that they'd just pass out and be quiet in their alcoholic stupor, but alas, no such luck.

When we arrived in Rome, my mother,  possessed by demons, insisted that we go looking for a Delta ticket desk to change the seats for our return flight (in the last row of the plane and not together). The help desk could not have been less helpful about telling us where to go. We walked in circles though all three terminals including A, B, and C and passport control. Finally we figured out that we needed to go to the departure terminal just upstairs from where we started. We walked right out of the domestic terminal A, and into the sunshine without going through customs. What kind of security is that? We only had our carry-ons with us, but it seems like there was no control. I could have had pounds of whatever in my bag and no one would have stopped me.

We finally find the Delta counter and suddenly we need to have our passports to get through just to the ticket agent. I pull mine out and my mother can't find hers. I'm calm and I think "I'll find it in that wreck of a bag."  No such luck. I try not to panic as I see she's losing what's left of her control after an hour of walking in circles. I leave her, still searching her bag, and wait patiently for my turn in line. Unfortunately, the woman behind the counter can't help when it comes to the seats.  All she can do is put a note in for us and maybe they will be changed later.
I turn, and look for my mom who looks as if she's going to cry and she says "what are we going to do?" I ask the lovely lady behind the counter what one should do if they lose a passport. She looks at me horrified, composes herself, and tells me we can file a police report there in the airport, get on the plane with that, and go to Palermo to the consulate there. I have sudden visions of our trip, so carefully planned, in shambles. But then she tells me to wait and makes a call over to Terminal A (we are in C). Apparently, there has been an announcement over the loudspeaker about a missing passport. We hope it is ours, and it is! The security guards back in terminal A have the passport! Relief.
So, my mother either dropped it, or it fell out of her bag going through the security check. We made our way back, and after getting her passport,  Mom kissed the security guard on both cheeks and thanked him. I made her promise always to keep it in a zippered pocket of her purse for the remainder of the trip. She agreed and threatened me with bodily harm if I tell anyone of this little misadventure. Oh well....

The flight to Palermo was uneventful. By the time we arrived we had been awake for almost 24 hours with virtually no sleep on the plane. (As I write this it's been almost 30 hours and I feel pretty good. Maybe the No Jet Lag pills work. Got sleepy a couple of times, but not bad.) 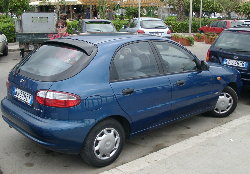 We picked up the rental car from Auto Europa, and what a joke that was. They hand you the keys, drop you at a lot filled with identical cars and leave you to wander, looking at license plates while dragging your luggage behind. We wound up with a Daewoo. Not a bad little car, but it seems a bit gutless.

From here we had a choice to drive straight to Gangivecchio or to go to Cefalù which was somewhat on the way. It was a Sunday, and I knew everything would be closed, but I also knew we might not get back this way. We had to go; this was the place my great grandfather was born. It only took us about an hour to get there. Once we arrived, we encountered what would be our destiny for the rest of the trip; we drove in circles looking for parking and wound up driving right through the town on smaller and smaller streets. Finally, we found a parking space near the beach and walked around. Thankfully, there are no phone books at the pay phones in town or I may not have been able to prevent my mother from calling up complete strangers with her grandfather's surname and saying, "hello, my grandfather left here 90 years ago and we might be related..." 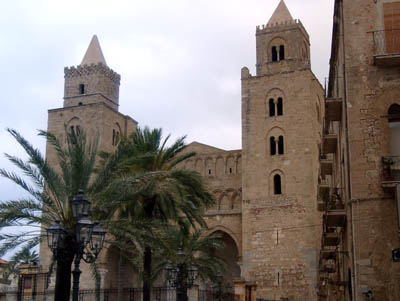 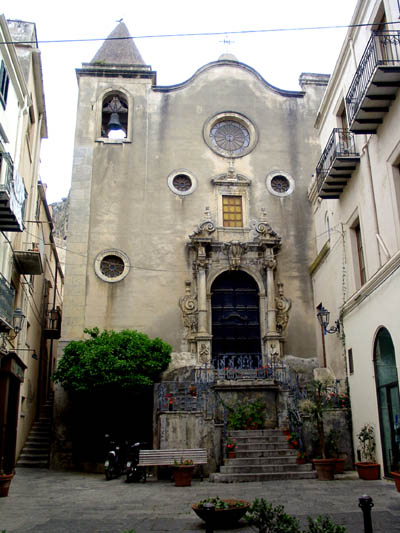 The town is charming and is laid out on an easy to navigate grid system. The cathedral at the top of town is Norman and built in the 12th century. Right down the street is my favorite church, the tiny Baroque Chiesa del Purgatorio, wedged in between two buildings. Cefalù is a tiny fishing villages that has given itself over to tourism. On a Sunday, when all the shops were closed, only camera toting tourists prowled the cobblestone streets. There is also a medieval stone fountain, down steep steps into a hidden courtyard, that only until a few years ago was still used for washing clothes. 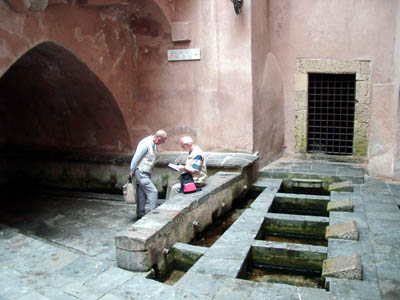 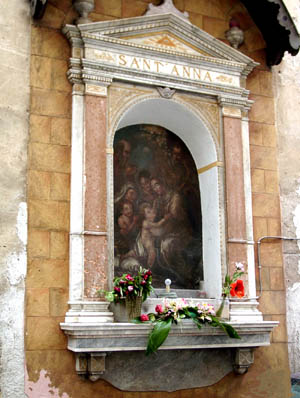 After Cefalù, we made our way to Gangivecchio. From the main highway, it was only 40 k. to our destination, but it took us 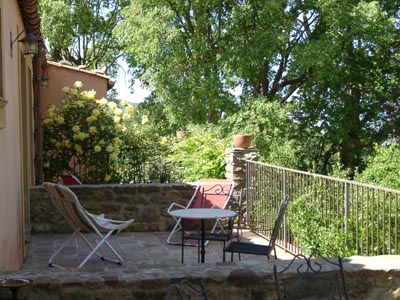 almost an hour on the winding two lane road. Well hidden in the Madonie Mountains, the main town of Gangi sits high atop a hill. Gangivecchio (old Gangi) is a 14th century abbey turned into a family estate in the 1800's. In the 1970's the matriarch of the Tornabene family, Wanda, opened a small restaurant in the Abbey which is only open for lunch. Her daughter, Giovanna, helps her run the restaurant, and they have written two cookbooks on Sicilian cuisine, one of which won the James Beard award (you can see them on the links page). Wanda's son, Paolo, opened an 8 room inn in the converted stables. The rooms are very simple, but tasteful, with whitewashed walls, dark wood furniture, and private bathrooms. Three of the rooms have a balcony, and we had one after we asked for it. Dinner and breakfast (1/2 board) is included in the price of 57 euro per person.   Insteadof going to sleep, we walked the beautiful grounds. The doors into to the Abbey were closed, which is where we will have a cooking class tomorrow. 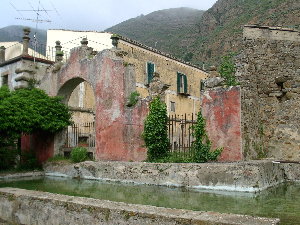 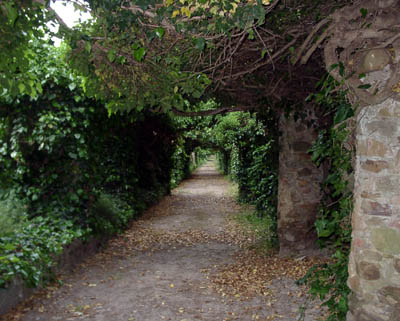 Dinner is served promptly at 8:30 PM, downstairs in the dining room of the inn. There are about 8 tables in the room and almost all were full, mostly with Americans from what we can tell. Gangivecchio is in the Karen Brown book on Italy, and thus has gained in popularity. Our first course was a wonderful, warm savory tart, with a flaky crust top and bottom, diced zucchini, and a cheesy custard layer. The pasta course was pasta al forno; baked mostaccoli with  Italian pumpkin (different than American pumpkin), fresh sausage, a cream sauce and crumbled amaretti on top. The meat course was an osso bucco (braised veal or beef shank) with a very refined, not chunky sauce. This was served without the usual polenta or risotto, instead there was a tiny square of spinach tart with a bread crumb crust and a little mashed potato pancake. Dessert was a bitter orange and pistachio torte with a shortbread crust. All that yummy food, along with some house red wine and I was asleep within seconds of hitting the pillow.