Today was our last day with the car, and we made it count. First we drove the 7 k. out of town and up the hill to Monreale, where we toured the cathedral but not the cloisters (which I'd seen before). The entire inside of the church is covered with tiny guilded mosaic tiles, telling stories from the Old Testament. If you go up there, make sure you walk away from the center of town, out to the edge to see the view of Palermo and the bay. Later, we sat in the piazza, sipped on cappuccinos, and enjoyed the spring sunshine. In all it was about an hour and a half trip. 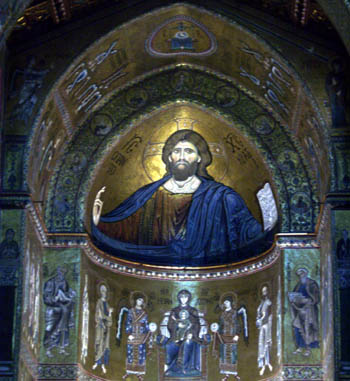 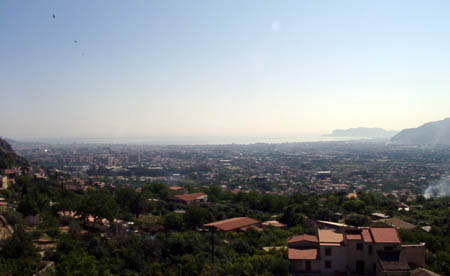 Above, mosaic tile apse inside the Cathedral of Monreale. At right, view over Palermo.

After Monreale, we drove back into central Palermo and visited the Cathedral and an antique market nearby.

Below, the Palermo Cathedral, which while quite grand on the outside,
is not nearly as beautiful as Monreale on the inside. 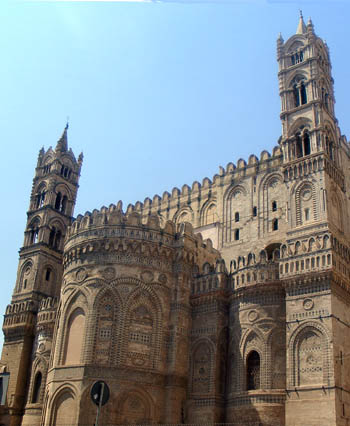 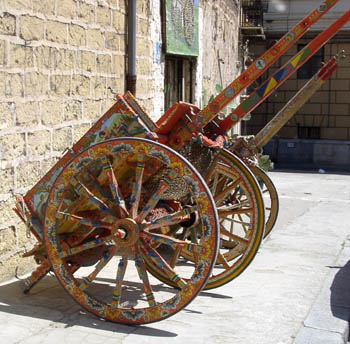 Above, the outside rear of the Palermo Cathedral and a "typical" old-fashioned Sicilian cart.

Below, the antique market behind the cathedral on a tree shaded street full of garages. 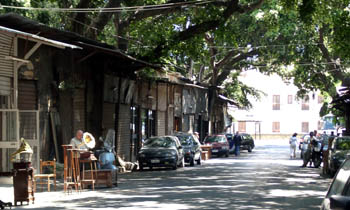 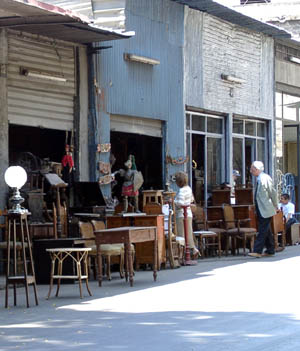 When we drove toward port to return the car, we got side-tracked at antique fair in Piazza Marina. We vowed to return after getting some cash and dropping off car. While we were in the car rental office, we got a restaurant recommendation from two other women who had been in Palermo for a few days. The place, Il Bagatto, happened to be back in Piazza Mariana.

Concerned with how we were getting to the airport the following morning, we walked over to the Politana hotel in search of the  airport bus stop. It was not clearly marked and probably too far to walk early in the morning with luggage. Also, the bus only left at 6AM (too early) or 7:15 PM (too late). However, the bus tickets are only 5 E each vs 40 E+ for a taxi. When we returned to our hotel we found out from the "nicer" hotel clerk about an airport shuttle service for $28 for two people.  We decided this was the best option for us and paid for shuttle from hotel.
Hungry, we walked back to Piazza Marina in search of lunch, and checked out the various restaurants surrounding the square. Many were full with families celebrating first communions on this day for some reason. We finally ate at Ristorante Palazzo Trabucco and had a very nice meal which included an anti pasta rustico, pasta con sardi and a pasta con pesto e gamberi. We even had a half bottle of Regaleali Bianco.
By the time we left the restaurant the fair was breaking up. We walked back through La Kalsa, though another very local street market, filled household goods, cheap clothes, etc. I bought a cool purse for 5 euro. Back near the hotel we had the best gelato of the trip at Gellateria Liberty on Via P.pe di Belmonte, 100/b. 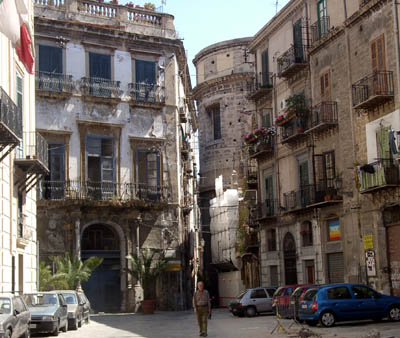 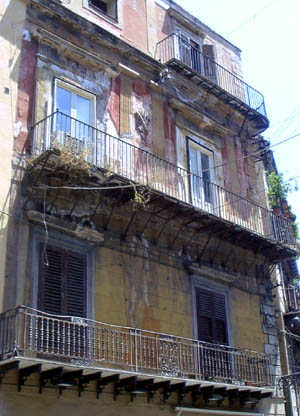 Our evening meal was a horrible dining experience all the way around. Click here for the story.

May 26-
Up early, ready to go at 6:30AM. The shuttle turned out to be a private car and driver. We left at 6 :40 and arrived at airport at 7:10 for our 9 AM flight. By 7:15 we were checked in and had a long wait ahead. We discovered that during the last week, the travel gods had smiled on us and someone (maybe the lady at the delta counter in Rome?) had seen to it to change our Rome-Atlanta seats so we could sit together. I bought a bottle of Nero di Avola for David after searching the airport. My carry is so heavy now I declare I will never do a trip with this many stops without a small wheeled carry-on. The seat rows on Alitalia were so close together I could not cross my legs at the knee, nor wedge my bag between the seat and the chair in front to get it under the seat.
In Rome we have about an hour and since we already have our boarding passes, we take our time, browsing shops, exchanging euro for dollars and making the long journey back to terminal C from terminal A. We arrive at the gate a half hour to departure and are greeting with "Where have you been?? We've been paging you! You're the last to arrive!" We had no idea....There were still a few people boarding so it was still a game of hurry up and wait. The rest of the flight home was uneventful. While were glad to be home, part of me was still wishing I was sitting on the beach in Porto Paolo waiting for the next course.