We needed to be at the Gare de Lyon by 10:30 AM to catch our train to Lyon. Fortunately, we already had our tickets as I had bought them in advance on the SNCF web site and printed them out at home. I still felt sick but pushed through, packed up some clothes to take with us, and we went downstairs. Unfortunately, I got sick again before we even left the building. Thank God for a supply of plastic bags and that there was no one around at the moment. I really wanted to go back upstairs and back to bed, but since we were going to visit David's dad, we had to go. As we walked to the metro, I looked everywhere for a cab, but there were none to be found. So, down into the the metro, David carrying the luggage (only one bag, the other was back in the apartment) and me clutching my plastic bag. After two changes of metros, we made it to the Gare de Lyon without incident. 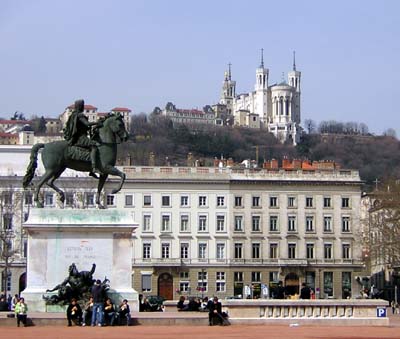 
The TGV was fine.  We had assigned seats in 2nd class, on the top floor of a double-decker car (what they call a duplex). There are two seats on either side of the aisle, much wider and with more legroom than airplane coach. It was very comfortable and we arrived in Lyon after whizzing through 350 miles of gorgeous countryside in a short 2 hours, on time. Tracy was there to meet us at the Lyon- Perrache station. From there we took the metro 2 stops to Place Bellecour and walked across to his apartment which was right on one corner of the Place. After we dropped our bags, we walked across the Place to have lunch at Le Comptoir des Marronniers. Le Comptoir is a Jean Paul Lacombe restaurant, one of 10 different restaurants he owns in Lyon, including the grand three-star Leon de Lyon. Since I still wasn't feeling well, I barely remember what I ate. I know it was roasted pork with a crispy skin and was very tasty. Tracy had steak tartare, which he said was wonderful, but raw beef on my delicate stomach did not appeal. Le Comptoir des Marronniers is located at 8, rue des Marronniers, one block off the Place Bellcour. 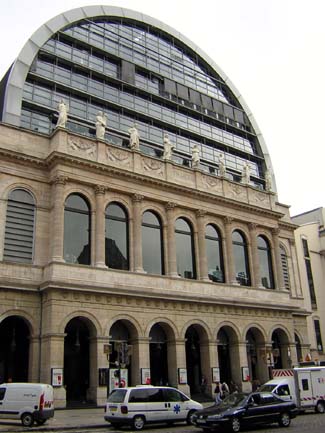 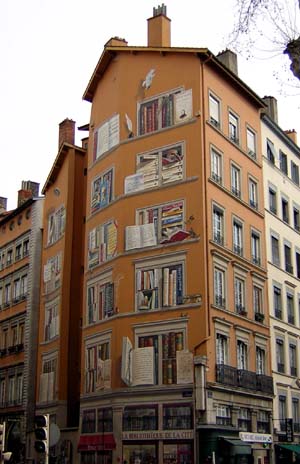 
Lyon turns out to be a very beautiful city with a nice feel to it. It's the second largest city in France and often gets ignored by travelers in favor of smaller towns in the region. The older center, however, sits between two rivers and up a hillside and is charming. It's also a university town with a lot of "young" energy. After lunch we took the metro a couple of stops and then walked along the river back to the apartment. We exited the Metro near the Opera house, an interesting mix of 18th century and modern architecture.  From there we walked through the Place with the Hotel de Ville which has a fantastic, huge fountain complete with a river goddess atop four rearing horses. The fountain was created by the same sculptor who did the Statue of Liberty, Bartholdi. There are some buildings where the entire side has been painted with a fascinating faux finish (see above), quirky and fun. Across the river we could see Vieux Lyon, the oldest part of the city dating back to as far as the Roman Empire or, more "recently" the Renaissance. We planned on exploring it further the next day, but decided to go back to the apartment and rest again before dinner. 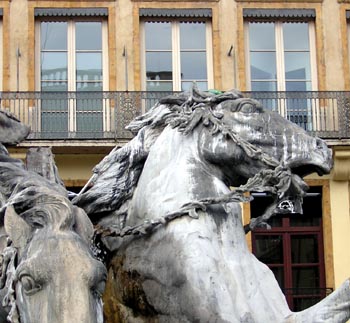 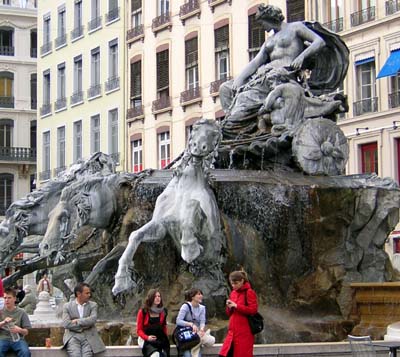 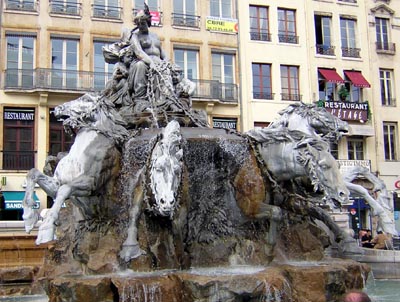 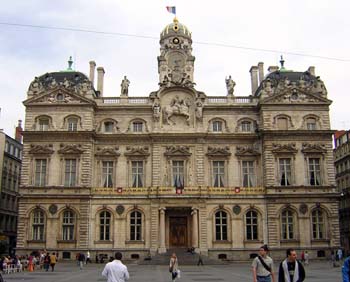 Above, the Hotel du Ville and Bartholdi's fountain.


For dinner, we walked across the river to Vieux Lyon to go to the Restaurant Lysaio (4 rue Ferrachat). This is a funky, offbeat place, filled with original artwork and owned by a mother/daughter team. Both attended to all the tables in the restaurant which sat maybe 35 people. Their business card says, "cuisine traditionnelle, produits du marche" (traditional cuisine and market products). The menu seemed to be an eclectic, modern, attempt on traditional French food. They have an 18 euro menu and a 27 euro menu. I had the smallest menu and David and Tracy both had the larger one. Tracy ordered a bottle of Ch. Clement Termes, Gaillac, 2002. We all received an amuse bouche of pumpkin-cumin soup which was really tasty. My appetizer was a mascapone and tuna mousse with a tomato-basil coulis. David's was pate de fois gras with a quenelle de fig "maison".  I can't really say I enjoyed the tuna mousse, but the fois gras pate was very good. Then, each of us received a lime sorbet with vodka which I just could not stomach. My main course was "salmon-trout", otherwise known as Artic Char, which was perfectly roasted and served with a chestnut flan. David had a Cote du Beouf served with carrot-cinnamon puree and mushrooms. Dessert was a selection of chocolate items, which, because I was still not feeling well, I did not eat. As we walked back across the bridge, I prayed I would feel better by tomorrow night when we had reservations to eat at the gastronomic temple of the Michelin three star chef, Paul Bocuse. 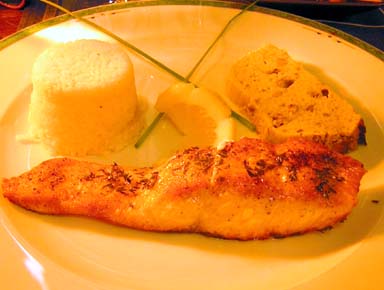 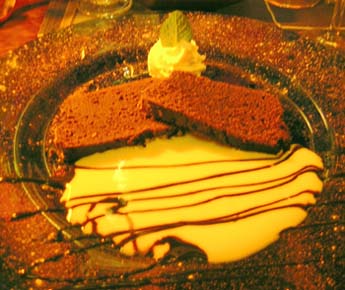 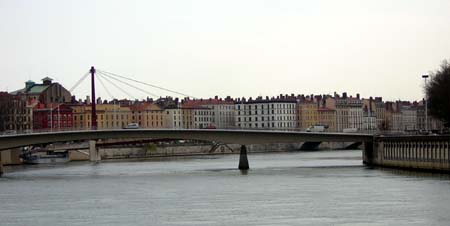