I always love going to Bradley International Terminal at LAX. It is chaos at its' finest, complete with multiple languages, people with huge cardboard boxed on their way to some third world destination, local families obviously on their first trip abroad, and Japanese tourists on their way home with Disneyland souvenirs and Rodeo Blvd. shopping bags. If I'm there, there's a good chance I'm on my way somewhere amazing and wonderful, and thus, it's all good.

When we arrived at the terminal, there were long lines at the to have checked luggage pre inspected. We waited one line for about 10 minutes before we realized we didn't need to be there because we only had carry-ons which didn't need to be inspected there. For some reason, we thought we had to go through it to get to the ticket counters. Once we realized our mistake, we got out of line and found the Air Tahiti counter. There was a long line for the flight to Papetee, but the one to Paris was short. There was even a separate line for people with no checked luggage so we didn't have to wait at all. We got our boarding pass and with an hour to wait we went in search of some breakfast. One of the shortcomings of Bradley is that there's no Starbucks! Still, we managed to find a decent latte at the Eurocoffee upstairs in the food court. Then, we passed though security and went to our gate. While waiting, we played "spot the French person" which involves trying to determine a passenger's origin by looking at clothes, shoes, or facial expression. Our departure was about 1/2 hour behind schedule.

Flying Air Tahiti Nui was completely new for us. The plane was an Airbus A340 and we sat in row 17 over the wing. Each seat has individual seat back video and was as comfortable as any other international coach class carrier. We liked it because of the configuration 2/4/2 which meant we didn't have to risk sitting next to a stranger or being stuck in a middle seat. After spending 12 hours on a flight to Hong Kong in a middle seat I vowed I would never do that again if given the choice.
Being the national carrier of Tahiti, all the flight attendants wore flowers behind one ear (yes even the men), and Tahitian inspired uniforms. After takeoff, they walked down the aisle, passing out fragrant frangipani flowers to all the women on the plane. Drinks were free, which is no longer the case on many US carriers even on international flights, and they passed out a little amenity kit which included socks, ear plugs, an eye shade, compact headphones which could be used off the plane (I think). The food was surprisingly edible, and we both had a pasta with cheese stuffed meatballs. We amused ourselves with the games on the seat back system and by watching a few of the 6 movies (Catwoman and Anchor Man). The 11 hour flight went by fairly quickly. Did not sleep, no space to put head down when seat in front is reclined.

I wish I could say the arrival was as smooth. We landed in heavy fog at Terminal 1, and proceeded to taxi for, no exaggeration, 25 minutes across the entire airport, over four roads, and into another provence (ok, slight exaggeration there). Then we deplaned down an outside staircase and onto a waiting shuttle bus which took us to terminal 2. Fortunately, there was no wait at immigration (and no stamp in my passport-pout), and we walked right through customs without a second glance.
Our first task was to locate an ATM (to the left as we exited customs) and get as much euro as possible so we could pay for our apartment upon arrival. David put his card in, we crossed our fingers and asked for 1000 euro, not sure of the maximum allowed. The machine said "Please wait while we contact your bank". I held my breath. Within 10 seconds we had our money in a mix of 50 and 20 Euro notes. We had a hard time finding the RER station and walked a long way through and outside the terminal. I keep thinking there had to be an easier way. Finally we found it.
The automatic machines would not take our credit card, so we had to wait in line at the ticket counter to pay in cash (as we had no euro coins either). There are two RER trains going into the city; one marked "Pepe" and one marked " K..". Pepe is the slow one, stopping at every station, and K... is the express, with it's first stop the Gare du Nord, or destination where we switched to the Metro. We took the express and the trip was about 20 minutes. We switched to the metro, and then another, the only hassle was to lug our bags up and down some of the stairs. We arrived at the apartment around 10:30, an hour behind schedule.

The apartment is fantastic, only two short blocks from the Place de Clichy Metro stop. It's tiny, but nicely done. There are large windows onto the street which let in a lot of light. The floors look like they are probably the original wood, uneven and creaky, but charming. The furniture is stylish, including some nice wood antiques, and there are nice linens on the bed. The bed is small (a double). It's a nice blend of old and modern with exposed beams in lieu of an old wall, and opaque wall panels which allow light to pass though. The kitchen is tiny but very serviceable with a 3/4 size refrigerator (large by European standards), a full size Miele dishwasher and a washing machine. The bathroom is narrow, but has a bathtub, and a folding glass shower door panel (a rarity in europe). The toilet is in a tiny room all it's own. There's a flat screen TV which we can't get to work, and even if we could, only gets local French stations. Wishes; that we had brought CD's for music and that there were bathrobes (or that I'd remembered to bring my lightweight silk bathrobe).

After a nap we went on a long uphill, circular walk to Montmartre in search of lunch. We found ourselves in the place du Tetre, the 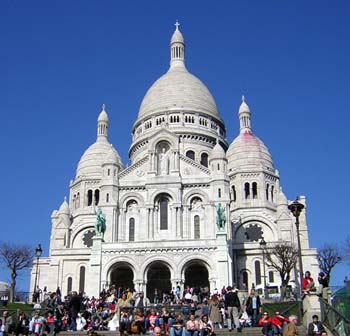 tourist center of Montmartre, surprisingly a place we'd never been to before. I don't know how we missed it in all of our time here. It was a beautiful day and every cafe was packed with outdoor diners. The square was filled with portrait artists vying for the tourist dollar. From there we walked around the side of Sacre Coeur and down to the street at the bottom of the hill. By this point were were really hungry, it was getting late for lunch (around 2 PM) and we wound up walking in a big loop back up to the Place du Tertre. Still, it felt really good to get out and walk around in the sun.

We must have looked at every menu in a half mile radius. As usual, we had a hard time deciding and finally just plopped ourselves down in the first available space we could find, weak from hunger. This place turned out to be Chez La Cousine on a side street off Place du Tetre (12, rue Norvins). It has a very tiny dining room in front which was filled with French tourists. In the back however, is a large room in which they've been doing a Caberet show since 1928, all in French of course. We could hear quite a bit of laughter coming from there. We each had a 12.9 E munu. I had Salad au lardon, David had terrine pork maison, we both had entrecote frites and chocolate mousse. That, plus 2 beers was 30 E total. The food was surprisingly decent. 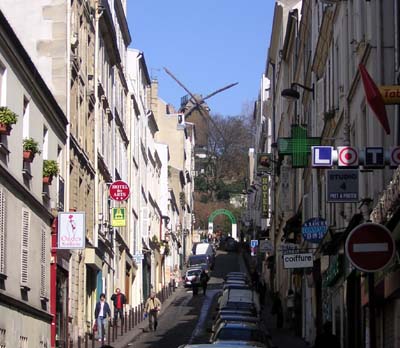 When we finished eating we walked back over to the basillica, checked out view from the front balconies, and as we walked down the hill, looked  for the balcony of "our old apartment". In 1997 we rented a fabulous apartment with a wonderful terrace and an amazing view of Sacre Coeur. As we walked down the central steps below the church, an African street vendor took me for Italian and approached me with "Alorra!" This made my day.
From there we walked downhill, through Pigalle, the faux red-light district. I say "faux" because even with all the sex shops and the Moulin Rouge caberet it feels very tame and commercialized. Before we went back to the apartment we stopped in a market and picked up some supplies; coffee, milk, yogurt, etc. I love the markets here.

We walked out for dinner around 9 PM, with no reservations. We wound up heading toward Le Petit Canard, a restaurant in the 9th that I had read about on Chowhound International message board.  The menu looked good, they had only two tables left, so we sat. This restaurant serves most duck, all of which have been raised on the farm owned by restaurant. There are menus posted on the window outside, including one in English, but inside you'll need to read the blackboard with menu on it. The place is very hot and smoky inside, and tiny, seating maybe 40. It seemed very much to be a "locals" type of place, we heard no English spoken. That said, both the server and owner spoke  English, so if you don't speak French, I don't think it would be a problem. Le Petit Canard is located at 19 Rue Henry Monnier, 01 49 70 07 95, Metro Pigalle et St Georges. 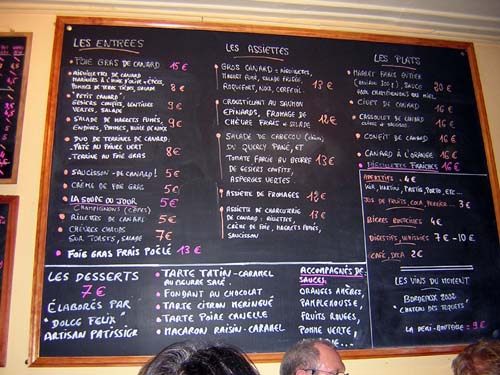 We ordered; "Les Vins du Moment"-Chateau des Turquets 2002 Bordeaux 1/2 bottle 9 E. I had a warm goat cheese salad (Chevres Chauds sur Toasts & Salad) for 7 E. The salad was good, but underdressed. David had Fois gras de Canard 15 E. For my main course I had Confit de Canard 16 E which was very good, and served with roasted potatoes and an eggplant casserole. David had Canard a l'Orange 16 E which was probably the same duck as the confit but with an Orange sauce. Since I work in the restaurant business, I tend to notice a lot of details. The service was very casual as was the server's dress;  camisole, black pants, belly showing, no shoes. Both the server and the owner stood in back smoking and drinking when not at a table (something we would see elsewhere). We were back to apartment in bed by 12:30 AM. 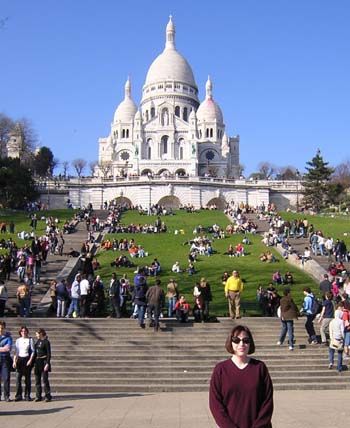