The day was sunny and warm and somehow we slept until 10:45! Usually, I expect to be up at 5 AM, but not this time. I made coffee in a French Press coffee pot while David went out to find a bakery. He returned with a baguette and two pain au chocolate which would become our daily ritual. Fortune was smiling on us because we seem to have happened on one of the best bakeries around. David said, "this is the best chocolate croissant I've ever had." I thought he was exaggerating until I ate mine and could not believe how good it was. Light, flaky, perfect, they made me never want to eat the leaden lumps that pass for pastry at home again. The bakery is three or four blocks south of the Place de Clichy on the Rue de Clichy and is called Florentin. 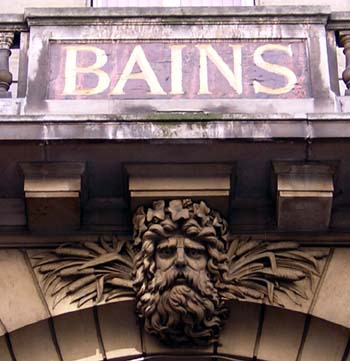 Over the archway to an old public baths building.

We left the apartment at 12:30 in search of a passageway I had read about off Rue Saint-Denis. Little did I know this is the real red light district. The street is not really seedy, there are plenty of shops and clothing boutiques which were all closed because it was Sunday. However, there were also, well... hookers. Old hookers. They were standing in every other doorway, dressed for work. It was a little shocking, but somehow it still felt safe. Finally we found the Passage Sainte-Foy and it was not as interesting as I'd hoped. It dates back to medieval times.


We walked from there to find the oldest house in Paris, now a restaurant. It's called "La Maison du Haut" or "Grand-Pignon" and was built in 1407 by the alchemist and writer Nicolas Flamel. It's located at at 51, rue de Montmorency, in the 3rd arr. 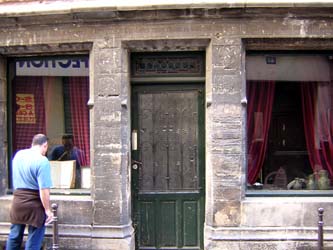 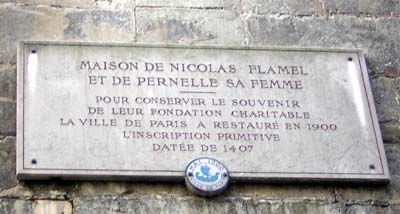 From there we walked past the Georges Pompidou to the plaza in front of Notre Dame where there were long lines to get inside. No surprise, since it was Palm Sunday. There are decent public toilets in the plaza, look for the entrance that goes underground to the right of the cathedral as you are facing it. Many people go inside Notre Dame, but neglect to walk around it. There's a lovely little park in the back where you can sit on a bench and admire the gothic architecture, flying buttresses, pointy spires, grinning gargoyles and all. 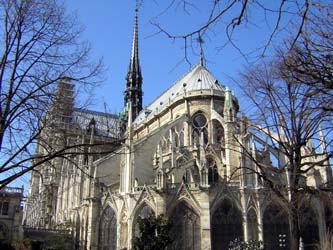 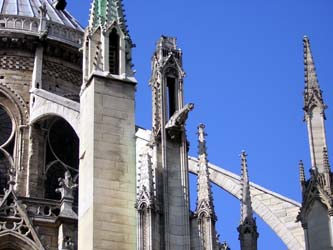 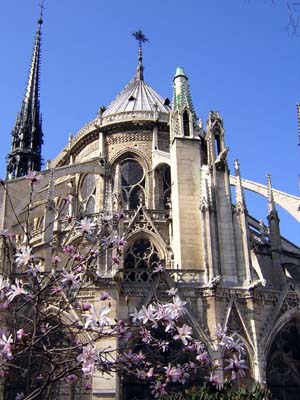 At this point, we were getting hungry so we decided to look for a wine bar I'd read about called Henri IV located at the tip of the Ille de la Cite. On our way there, we walked through the Sunday bird market and past the Conciergerie. Unfortunately, when we arrived at Henri IV, we found it closed.  By now it was about 2:30 and we knew we wanted to go to the weekly Sunday Organ recital at St. Eustache at 5:30 PM, so we heading in that direction in search of a place to eat. We stopped in the church, to confirm the recital time and then headed around the corner to a great little walking street, Rue Montorgueil. We settled on Comptoir du Commerce. Given that it was mid afternoon I was really in the mood for something light, so I ordered the Cheese plate (12 E) which came on a wooden board and included St Nectaire, Camembert, Chevre, Bleu Duavegre, and Cantale. David got scolded, in a nice way, by the waiter for trying to name the cheeses (incorrectly). David had the a pate/terrine of chicken and duck for 8 E. We also ordered a 1/2 btl of wine, Broilly-13 euro.  Rue Montorgueil turns into rue des Petits Carreaux at the restaurant, which is located at 1 rue des Petits Carreaux. 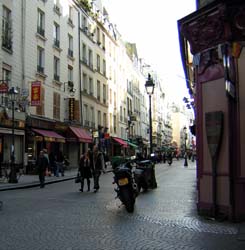 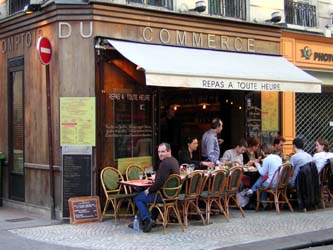 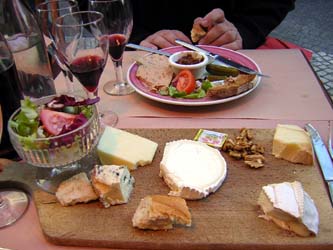 David has always had a fascination with church organs so I knew that hearing a concert in a 700 year old church would be a treat for him. It was, and I know we heard a Bach piece, I just can't remember which one. The recital lasted about a half hour and was free. 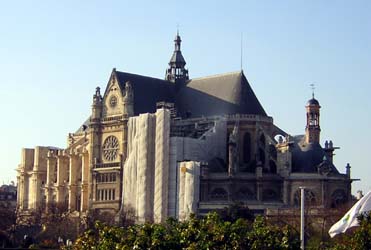 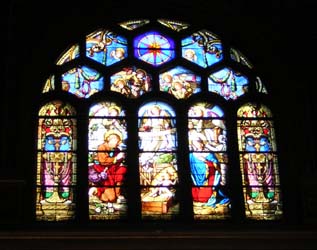 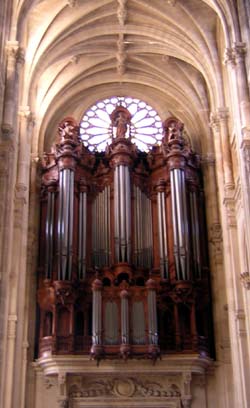 We had been considering having lunch at the three starred Le Grand Vefour, so after the recital we walked over to the Grand Palais (where the restaurant is located overlooking the gardens) to look at menu. Lunch is a 3 course pre fix of 70 E per person, but dinner would be about 250 E per person. Ouch! Before going back to the apartment to rest, we stopped in an internet place in the bottom of our building to check our email. It cost 1 Euro for 15 minutes. The most frustrating thing was that they only had French keyboards which have the letters in different places from English keyboards. 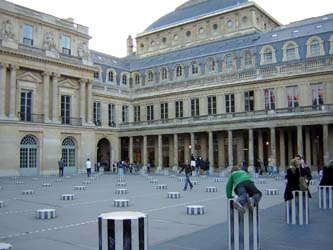 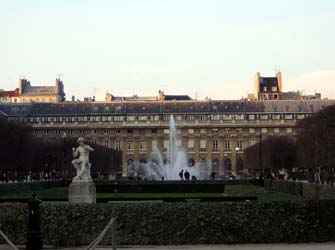 I'm always nervous when I go back to a special place. I'm concerned it won't live up to my memory. For dinner, we decided to go back to Terminus Nord, a restaurant we'd eaten in on two prior trips to Paris. Both meals had been wonderful and we love the Belle Epoque decor and efficient service. Terminus is a member of the Flo Brasserie group, a restaurant company that owns several historic brassieres in Paris. It's located at 23, rue Dunkerque, across the street from the Gare du Nord. 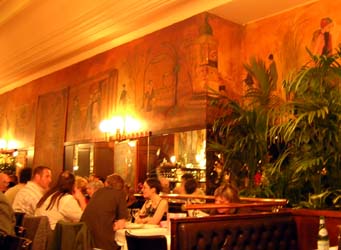 When we arrived the restaurant was busy and they asked us to wait at the bar for a moment. David's curse is ordering a "martini" in countries where they are not made (just about anywhere outside the US or Britain, or British commonwealth). The young bartender grabbed a bottle of "Martini" as was about to pour it into a glass when David gave him the proper instruction on what went into a Dry Gin Martini and how to make it. Unfortunately, they had no shaker, no olives, and no proper martini glasses. The bartender shook the martini in a juice bottle and served it over ice in a water glass. It was actually pretty good. 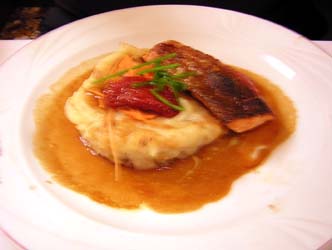 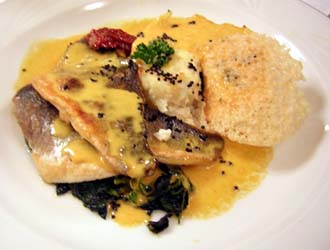 Terminus has a full menu which includes heaping platters of shellfish. I've never ordered one, but vow to do it someday. We went with the "menu", which for 34.40 euro each includes 3 courses, water, 1/2 bottle wine, and service/tax. We opted for a bottle of white wine, Petit Bourgeois, 2004 Sauvignon Blanc, Henri Bourgeois for an extra 8 euro supplement. I had 6 oysters, Belon #4, which were very briny. D had Fois Gras du Canard, good but better the night before at Le Petit Canard. I had Bar (seabass), roasted with a risotto and saffron sauce, garnished with a bit of caviar. D had salmon, roasted with skin on served with mashed potatoes and mushrooms. Both of us cleaned out plates. For dessert, I had a chocolate torte with coffee sorbet and D had three small creme brulee; coffee, plain and pistachio. Once again, we left satisfied and not at all disappointed with our meal. 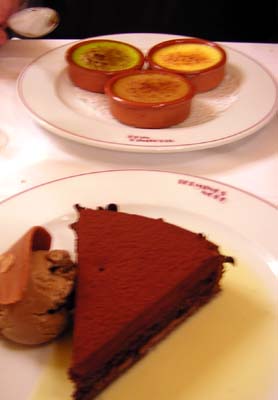