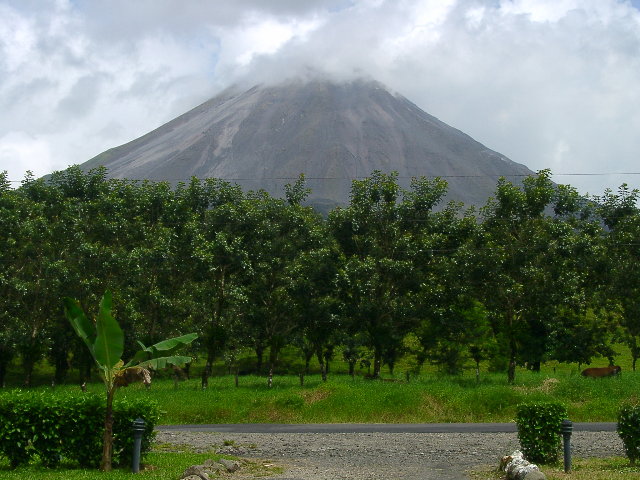 On our way to Arenal, at San Ramon we encountered a road block on highway 142 because of the Fiesta de la Virgin de Los Angeles. Uncertain as to what was going on, we waste 20 minutes trying to find a way around, since this road the the direct route to Fortuna. Finally, we look at the map and take another route over to highway 141 which adds on an hour. It's quite scenic, with winding roads over a mountain, and it took us about 3.5 hours total to get to Fortuna from San Jose.

At Fortuna, we drove through town and there's not much to it. It's the usual tourist town filled with restaurants, internet shops, 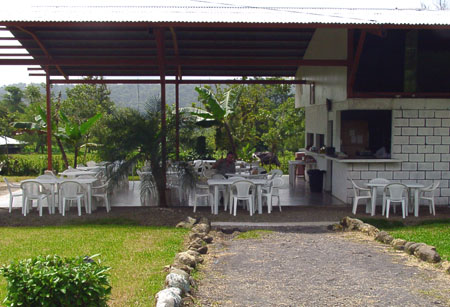 travel agencies, and inexpensive lodging. We stopped and had lunch at a restaurant called El Novillo which I'd read about on the Fodor's board. It's located on the outside of town toward Tabacon, and has a fantastic view of volcano (the photo at the top of the page was our view from the table at El Novillo). The top of volcano was in clouds, but we got a break and see were able to see some boulders and smoke coming down the sides. Like many restaurants in Costa Rica, the dining area was outside. The food was basic, but nicely prepared, and the portions were huge. I had Pollo al ajillo which was a garlic smothered grilled chicken breast. David had steak al Novillo and we had 3 beers between us ($18 with tax and service).

After lunch we drove out to the Arenal Observatory Lodge. The road is not paved, but this wasn't a problem in the Rav-4. It takes about 20 minutes to get there from Fortuna. We had room 27, a "Smithsonian room" on the lodge side of the ravine. Our room was in a small building, housing 4 rooms, with an observation platform on the roof. We were on the bottom floor and fantastic view of the volcano right from the bed. I'd recommend the room above ours, room 29, as it had two windows and a view of the lake in addition to the view of the volcano. Across a suspension bridge spanning a deep ravine, is the pool and "Smithsonian Block".  The rooms down the hill from the restaurant were even nicer with a private patio and lake view. In general though, it's all about the rain forest and the volcano, and not the rooms, which are very basic inside.

Tired, and not in the mood to drive back into town, we had dinner there at the hotel. It was mediocre and pricey. I had the house soup (beef with veg) which was actually pretty good, but David's asparagus soup was definitely the powdered box variety. David also had a bland and overpriced pasta. We went to bed early, listening to the sounds of the jungle and hoping to hear a rumbling from the volcano. 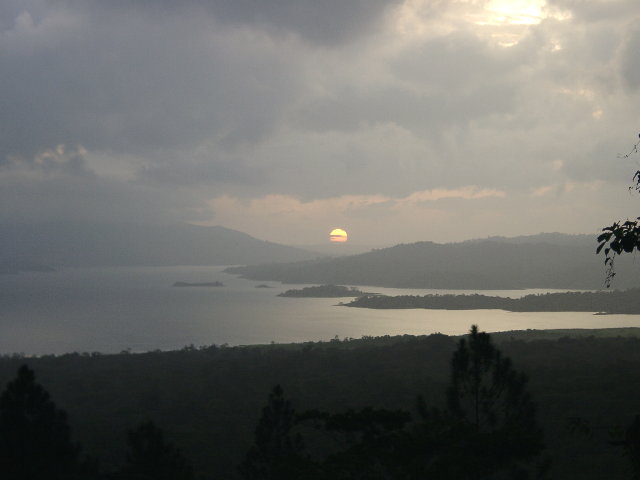 View of Lake Arenal from the Observatory Lodge

In the morning we had breakfast in the dining room which was included with our room. It wasn't bad bad, just the average breakfast buffet. The coffee, however, was fabulous, no surprise, since Costa Rica grows wonderful coffee.
Our room rate also included a guided walk through rain forest to the old lava flow at the base of the volcano. We met up with a group of other other hotel guests in front of the reception area after breakfast. Before we even left, it began to rain and I was really glad I'd brought a plastic poncho. We were bussed down to the park entrance, where we all paid $6 per person admission to the national park. It was a beautiful, muddy, wet, 2 1/2 hour walk, and very nice to have a guide. He had a high powered telescope and without him we would have missed the poisonous eyelash viper, termite mound, and all the various flora and fauna.  It took us about an hour to get through the rain forest portion and out onto the lava flow. From there we has sweeping views of the volcano and lake. In the distance, we saw a flock of toucans flying from tree to tree. The only downside is that the walk is not a loop; we had to go back the way we came in. We crossed a small stream, and on the way back, David lost his footing and completely drenched his boots. When we returned to the hotel, they were nice enough to put them in the laundry drying room for the next 24 hours. Like most tropical countries, it's next to impossible to air dry anything quickly due to the humidity. 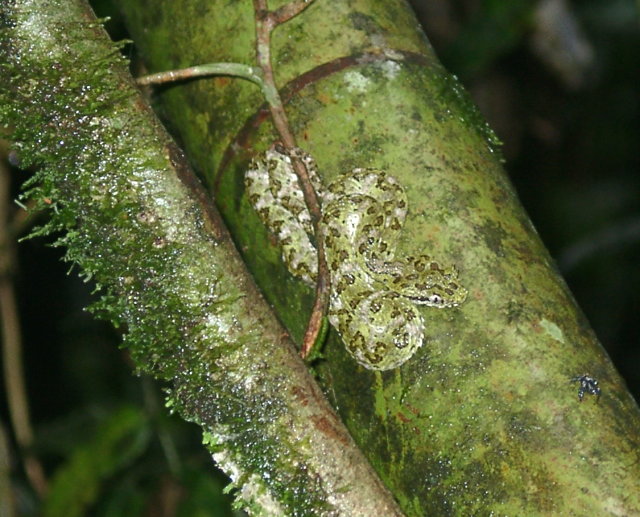 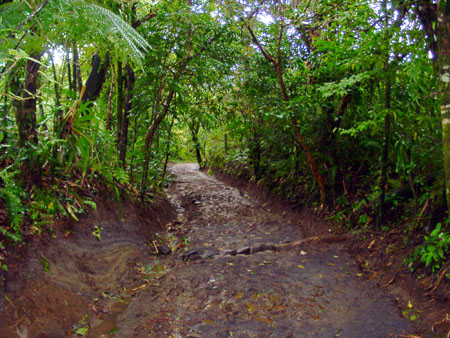 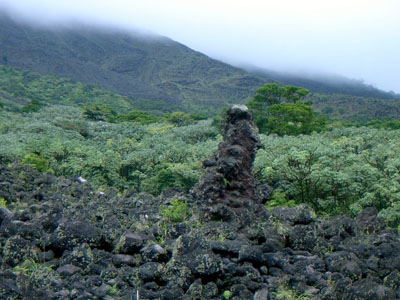 Above, the path through the rain forest and the old lava flow.


In the late afternoon, we went into town with the plan to go to a hot springs (of which there are many), have dinner, and go to the viewing point (el Mirador) to see the volcano (and hopefully some lava) at night.  We'd heard at the hotel there was a new hot springs, but it was by reservation only, made from the hotel. We didn't want to be tied to this so we decided to check out the others. We stopped at one place where the admission was $10 per person, but they didn't rent towels and we didn't bring any with us. They sold big paper towels, but that just didn't sound appealing to me at that moment.  We had an early dinner at Restaurante La Choza de Laurel on the west side of town. The food was quite good and David had a plato tipico, while I had a casado (rice, beans, chicken, plantain, etc.) for dinner. Food, drinks, tax and service was around $11. 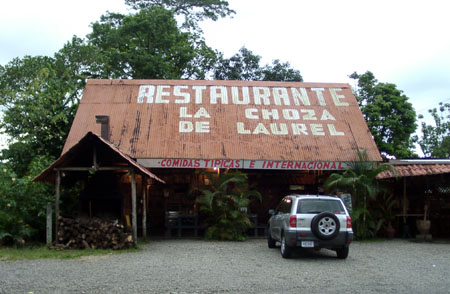 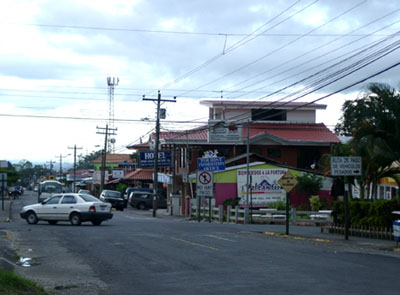 After dinner we went by the Mirador but the volcano was still covered by clouds. Had it been clear, for $3 we could have driven

up to a private cabana overlooking the volcano. The tour cost for this from the hotel is $25 per person. On the way back we stopped at the famous Tabacon hot springs. It was already dark by then and the entrance fee was $19 per person. But it was so crowded they were out of towels. We took a peek inside and surveyed  the "scene". I know this is a very popular place, but I'm just not sure why. It was packed with people and didn't really seem relaxing.  From Tabacon, we walked down the road to the Montana del Fuego hot springs which was $10 per person but also did not rent towels (foiled again!). At this point, David wasn't feeling well, so we went back to the hotel where we visited the jacuzzi and went to bed. We were awakened in the middle of night by the grumbling volcano and even saw the red glow of lava from the window in front of our bed.

In the morning we were up early and off to breakfast. After eating, we took a walk to the waterfall on the grounds of the hotel. It was about a half hour walk though rain forest down to the water. On the way back, it's all uphill and a bit strenuous at the end. Because of the humidity, we were drenched by the time we got back. We packed up and got ready to go... 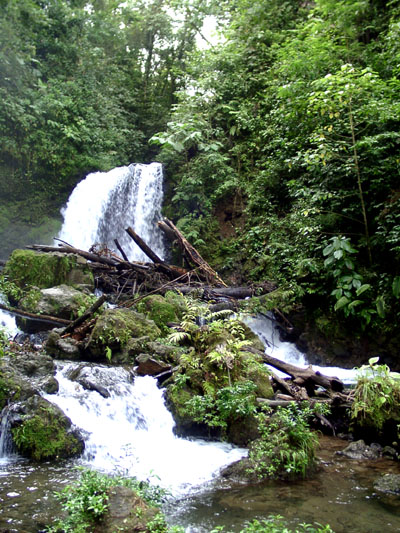 On to the Pacific Coast...