Note: It's taken me 6 months to get around to writing this portion of the trip. I think our visit to S-21 prison was so disturbing that I've been unable to put it into words. I'll try... 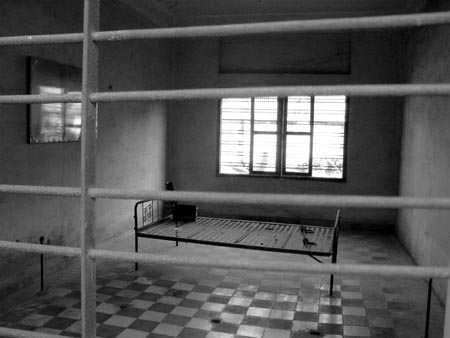 In the afternoon our plan was to visit the Tuol Sleng genocide museum. We also wanted to visit a couple of markets and possibly the Killing Fields. After consulting a map we realized everything was quite far apart and we wouldn't be able to do it all in a day, especially not by walking. We cut out the Killing Fields and the Russian Market and decided to hire a hotel taxi to take us to S-21 and then to central market. It was expensive, but we were running out of time.

The driver took us first to S-21. This is the site of a former Khmer Rouge prison housed in a school in Phnom 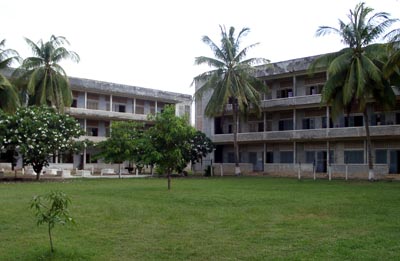 Penh. From 1975-1978 it was used as an interrogation center and prison for more than 10,000 people all but 7 of them exterminated in the Killing Fields. The prisoners were from all walks of life and many different nationalities. Most however, were Khmer, and most were civilian with no military ties. Whole families were taken, questioned, tortured, and then killed, including children and infants. All were photographed and documented in much the same manner as during the Nazi Holocaust.

When we arrived, we walked through the front gates and paid our admission. We were told we could watch a 1 hour movie about the prison, and although I'd heard the movie was good, we declined due to time. We hired a local woman as a guide to take us around and explain everything. Unfortunately, her English was not very good and she was very difficult to understand. Still, much of the enormity of the atrocities came through loud and clear.

Prisoners were held in both single small cells (2 feet by 6 feet) and in mass rooms. Those in the mass rooms were shackled to a central bar. The were not allowed to speak to each other and had to ask permission before they could do anything, even roll over or go to the bathroom in a bucket. If they did not, they were beaten severely. The "guards" were uneducated chidden from age 10-15 and were horrifyingly cruel. Many of these boys are now men, alive and well and living free in Cambodia. They have not been put in jail for their crimes during the Khmer Rouge era.

On the bottom floor were the interrogation rooms housed in former classrooms. These held a single bed to which a prisoner was tied and then tortured. Outside, on the wall is the infamous sign containing the ten rules of conduct in both Khmer and English. These regulations were posted in all the rooms as well. Children's exercise apparatus on the playground were regularly used to hang prisoners for torture. Strangely enough, the prisoners were not killed at S-21, instead they were taken to the killing fields where they were buried in shallow mass graves. 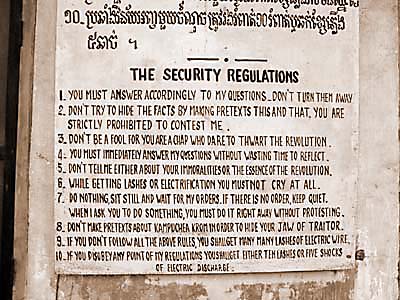 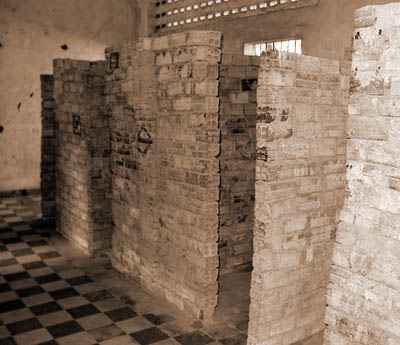 I got the impression that S-21 is no longer supported by the goventment-it's like they want to forget it and don't want tourists to go there. The roads surrounding it are in horrible condition, unpaved and rutted.

The hardest thing for me was that it was impossible to comprehend the Khmer Rouge logic or lack thereof. I kept trying to get my head around what happened and figure out why they thought what they were doing was right or correct in any way. Obviously genocide is wrong, but usually the people committing these heinous crimes have some sort of justification that allows them to proceed. Usually it's a religious or racial motivation. I could not find the reasoning in the Khmer Rouge. Initially, Pol Pot's concept was to go back to what he called "Year Zero", to bring the country back to an agrarian state. This is why they began by killing off anyone educated. They forced everyone out of the cities and into the countryside to farm and people began to starve because they could not feed and support themselves. Then it seems that the KR  moved on to to wholesale mass murder, killing uneducated farmers, women, children, and infants. Over 3 million in all were murdered, most their own countrymen.  I still can't understand the logic. Had they not stopped, there would have been no one left. Hence my frustration and inability to write about this for so long.

From the prison, we went to the Central Market, a fascinating art deco era domed building built in 1935. The 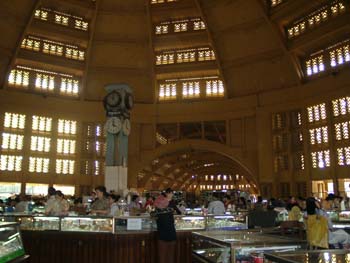 hundreds of market stalls sell a mix of tourist souvenirs on the outside everyday items on the inside. Food, clothing, electronics, just about anything is available. Rumor has it that up to just a few years ago, marijuana could be bought by the bundle for a few dollars at the Central Market. We saw no such thing. Just beautifully displayed colorful produce and the same tacky souvenirs sold everywhere else. Beggars, both small children and land mine victims are everywhere and very persistent. By the time we were in Phnom Penh, it was exhausting.

Unfortunately, it was so hot, both inside and out, and horribly crowded, that patience began to wear thin and we left after about a half an hour. We were going to walk around and see if we could find a share taxi to the border, but there was nothing obvious, and out of sheer exhaustion, we decided to go back and buy our minibus tickets from the River Street Cafe (#357 Sisowath opposite the FCC). 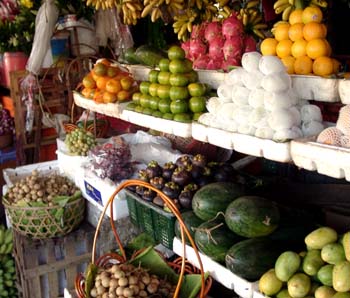 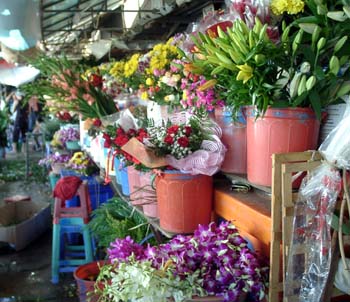 For dinner, we went back to the Pop Cafe, an Italian restaurant and art boutique on the river front, about a block up from the FCC. It's owned by an Italian ex-pat who imports most of his ingredients from Italy. He's trained a few local women to work in the kitchen, and they do quite a good job. He also sells some beautifully handcrafted art pieces, including an unusually carved wooden chess set that David bought. While we were having dinner, another Italian ex-pat, a professional photographer who's photos are for sale in the cafe, came in for dinner. It was quite a surreal experience to be having excellent pasta and gnocchi, drinking red wine and hearing rapid Italian spoken, all the while, knowing were were in Cambodia. While the meal was excellent, my only regret is that we didn't have more time to try and find better Cambodian food. I guess we'll just have to go back.....

Back to Phnom Penh, Day 2-AM   On to the trip to Koh Kong