Up early and downstairs by 6 AM. I went to checkout while David went in to get started on breakfast.  The minibus showed up at 6:15 and we barely had time to grab a couple of bread rolls before we were on the road. So much for our 7:00 AM pickup.

We were the first ones on the bus and the driver told us there would only be 6 of us today on the bus that seats 11. Since this was the bus we'd take for the entire trip, we got first choice of seats and took the best, those behind the driver with the most leg room.

The bus wound it's way through the streets of Phnom Penh to pick up the next passengers, a German couple staying at a guesthouse in the center of town. From there, we went out to the lake side guesthouses where we picked up a couple more passengers. From there, we headed out of town, past the airport, and down the main road south toward Sihanoukville. It was quite comfortable, especially since we weren't jammed in like sardines.

After a couple of hours we reached the junction town of Sre Ambel. Here, the road continues south to the coast at 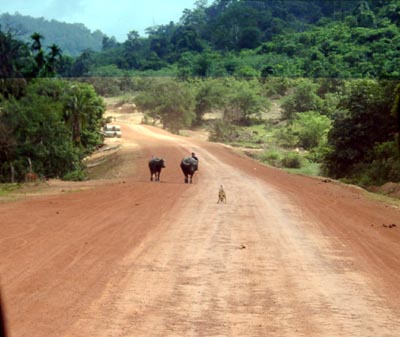 Sihanoukville, or, it turns off onto a road that goes over the mountains and to the border town of Koh Kong. The driver made a quick stop at a mechanic to pick up a spare jack and we headed out on to the new road. But first, we were flagged down by four backpackers who had been dropped off at the junction coming up north. They wanted to know how much it would cost for them to get a ride to the border. The driver told them 400 baht (about $10). One of the guys on the road scoffed and said , "400 baht for all of us?" The driver laughed and said, "No, each!" The guy countered with 3000 riel (this is less than $1!) The driver just laughed. I could feel the tension rising in the bus, knowing that we'd all paid $15 for the ride and if the driver caved in, he was going to have a mass revolt. Someone on the bus told him what we'd paid and he (the backpacker) said he'd been told he could catch a ride for 2000 riel. Yeah, maybe on the back of a hog truck. Needless to say, the guys were cheap and didn't get on our bus. For all we know, they're still standing there.

The trip across the mountains really wasn't that bad. The road was unpaved, but graded and we made decent time. It took about 4 hours to cross, including the 4 rivers we had to take "ferries" over. These ferries, were in essence, large wooden rafts strapped to 3 or 4 wooden boats underneath. They would then load as many cars, trucks, and busses as they could fit, and take us across. Each time we stopped, we waited with other cars and trucks to pass over, but the wait was never longer than 15 minutes. We also made one longer stop for food, but it was a bit dubious and even I wasn't feeling adventurous enough to try it. The bathroom at that rest stop was particularly bad; it was the typical outhouse with squat toilets (which was fine) but it was absolutely infested with mosquitos. Quite the daunting task to keep one's bare rear from becoming mozzie lunch. 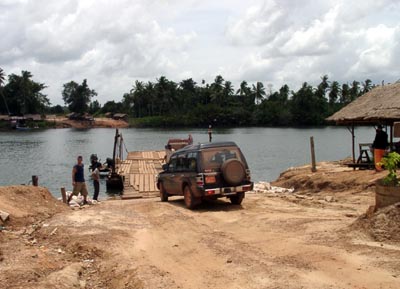 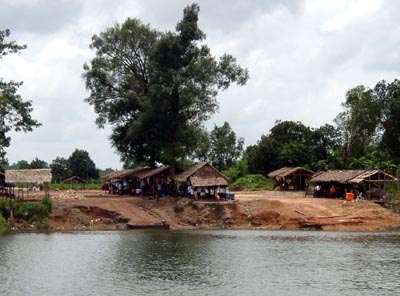 When we finally reached Koh Kong, the driver stopped at his family's restaurant where we were encouraged to buy a drink. We did, anxious to be on our way to the border and cross before it closed at 5 PM. We also wanted to try and make it to the ferry in Trat so we could get to Ko Chang that evening. Fortunately, we were on our way shortly, and the driver took us all the way to the border, crossing over the brand new bridge. In the recent past, one had to hire a boat to cross the river and then a taxi to the border, but we were let out right in front of the border crossing.

After passing through customs and immigration on both sides in the sweltering heat, we were finally in Het Lek, Thailand. Now, the task was to get to Trat and then to the ferry. Thus we began the next phase of the oddessy.

For 40 baht ($1) we were crammed into a minivan with 10 other foreigners and our packs. It was about an hour's trip to Trat and midway through the driver stopped in a town, forcing us all to get out and change over to another van. Why, we have no idea. We arrived in the center of Trat, at the central bus station. Most of the other passengers were trying to get to Bangkok by bus that night, so they headed off to find their bus. Our plan was to get to the ferry or stay in Trat for the night if necessary. We were offered a nice looking room for about $4, but then we were told that we could make the last ferry if we hurried. So, throwing our bags and ourselves into the back of a pick up truck, we raced about 15 minutes to get to the ferry dock (another 30 baht each). Upon arrival, we were presented with 3 or 4 companies selling RT tickets on the ferry for about 150 baht each.

Then, we waited. We had rushed to get there, and of course we had to wait for another truck to take us to the actual ferry landing a few miles further away. By the time we were actually on the boat and on our way, it was 5:30 PM and the sun was starting to set.

It was an easy crossing, calm and the brightly painted wooden boat was uncrowded. When we arrived there were trucks waiting to take the passengers to various beaches on the island. We had nowhere specific to go and only a vague idea of where to begin. Hurried by the drivers, we got on a truck going to White Sand Beach, the most populated and popular beach on the island, for 30 baht each. I'm sure that in high season, it would be overcrowded, but it was late on a Friday night in low season and it worked for us. I had a printout from the internet that listed the resorts and we started with the first called, White Sand Beach Resort (the use of the word "resort" is quite loose here, most are nothing but glorified guest houses with bungalows on the beach. All have restaurant facilities and some of the nicer ones have swimming pools are are more hotel-like. This is definately not the Four seasons, Maui.) They had thatched huts with shared bathroom facilities for 150 baht a night. These had no electricity, nothing but a mattress and a mosquito net. They also had A/C bungalows for 700 baht a night.

We moved on to the next resort down called "Cookies Resort". There, we got a fan cooled bungalow with bathroom, in the second row back from the beach for 300 baht a night. But what I think really sold us were the cute kittens playing on the porch of the bungalow. 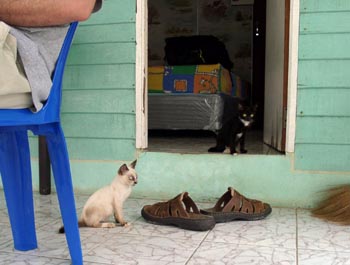 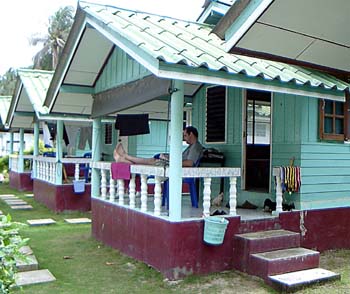 On the ride into town, we'd met a French couple who came with us to Cookies, and we met up with them for dinner. Many of the resorts set up tables in the sand in front of their restaurants. We walked down a few hundred yards and chose one that had tables with candles on them right at the high tide line. It was actually quite romantic and we had an enjoyable meal with David doing most of the translating.

I wish I could say that we slept well, but we didn't. The bed was like a rock, and felt like we were sleeping on a set of box springs with no mattress. The room was too hot, even with the fan, and the noise from the music at the neighboring bar was thumping into the wee hours. The walls were plastic with an American Coyboy pattern (very out of place!) and the bathroom was hot and musty. We decided the next morning that it was time to move.

Back to Phnom Penh Afternoon

On to Ko Chang