We awoke at 6 AM to get ready to go out and see our first temples. When we left our room, there was Ponheary, dressed in her official guide shirt; she was going to be our guide after all. Someone from her school would call her if she needed to go in. We had a quick breakfast down the street at the "Cheese Shack", a restaurant owned by Ponheary's friends. The Cheese Shack on Wat Bo Rd became our default breakfast place all four days we were in Siem Reap. Breakfast was never more than $4 for the two of us, usually much less.

The driver took us to where we purchased our 3 day temple pass for $40 each plus passport photo. We didn't even have to get out of the car. We gave Ponheary the money and the photos and in two minutes she was back with our laminated passes.

The first stop was the temple of Bayon. We arrived around 8 AM, before the tour busses. Ponheary stopped us at this entrance, where a statue covered bridge leads up to the gate. One side of the bridge are the statues of the gods, and on the other, the statues are all demons. As you walk through the gate, there are scratch marks where Vietnamese soldiers drove their tanks through the entrance. On the other side, our driver was waiting to take us the one kilometer to the temple. 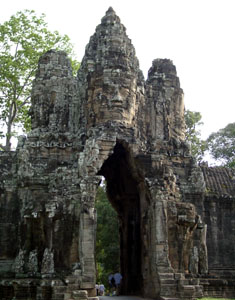 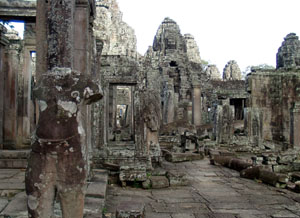 This temple is one of the most well known and stands in the exact center of the ancient city of Angkor Thom. It is a Buddhist temple built in the late 12th century by King Jayavarman the 7th. It's easy to assume that the omnipresent "four faces" on the top of every tower are of the Buddha, but from what I've read they could also be the King himself. 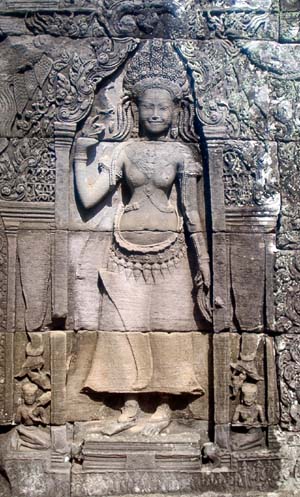 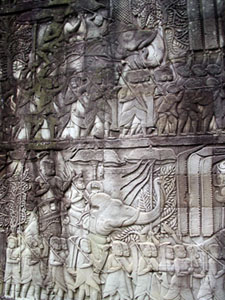 The temple is covered in excellent carvings and bas reliefs ranging from the daily life of peasants to the battles and wars of kings. Some of the more beautiful ones are called apsaras, or dancing ladies. The one above on the left is one of Ponheary's favorites because she is smiling. The one on the right above depicts the King riding into battle on his elephant.

It was here, while walking among the galleries of bas relief's, that Ponheary told us her first story of what happened to her family during the time of the Khmer Rouge. In 1977 they lived in a village further out in Siem Reap provence. Her father, a local teacher, was taken and killed along with 40 other teachers by Khmer Rouge soldiers and buried in a mass grave. Her mother, four sisters, and brother were placed along with 350 others in a pagoda converted into a "prison". They were given 1 kilo (2.2 lbs!) of rice per day to feed all the people. Mostly, it was just water. The only reason they didn't starve to death is because people who were outside who had been friends of her father's, left bits of food for them in the trees. She said that after one and a half months her family escaped.
She told us another story about how she had been accused of stealing food by the soldiers and had to "confess" because they were beating her. They then forced her to dig her own grave out in the forest. She said she dug it very shallow, only a few inches. The soldiers hit her in the back of the head and left her for dead, covered with dirt. She was unconscious for a few hours and when she awoke, they were gone. She ran away to where a hospital where a doctor hid her for months. 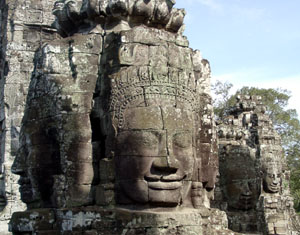 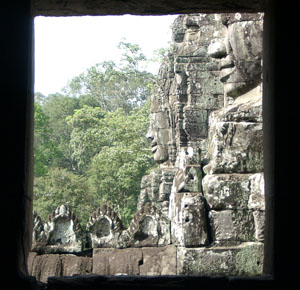 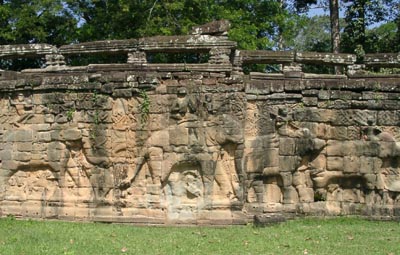 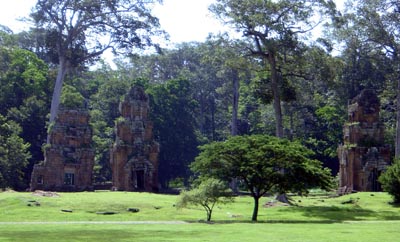 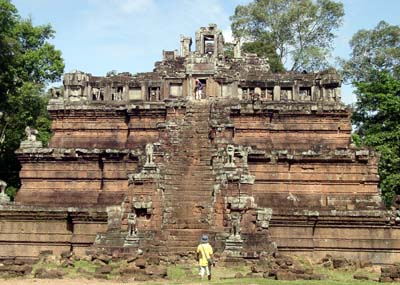 Along the way, we also stopped to view the temple of Bauphon, which is currently under reconstruction and the temple of Phimeanakas, which we did not climb, but instead walked around. From here, we walked past the royal bathing pools toward a gate in a wall and down a jungle path. Once a bit away from the main temples, it was cool and quiet under the jungle canopy. There were workers clearing brush along the path and a young man had slung a hammock between two trees and was cooking some chicken over an open fire as we passed. We made our way to the temple of Preah Palilay, which turned out to be a small temple in poor shape, but it was still a treat to see it appear out of the trees. 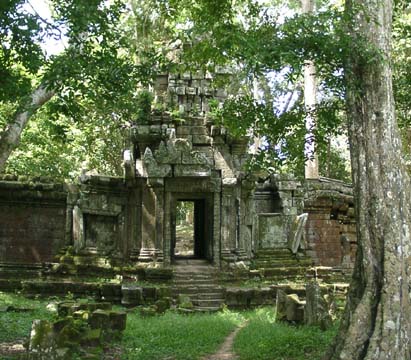 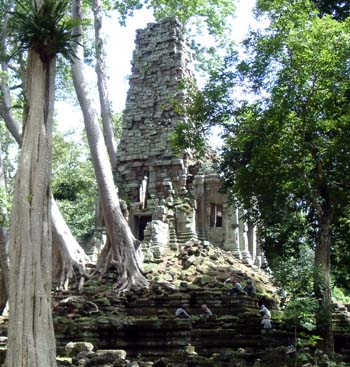 On to Afternoon at Angkor Wat...