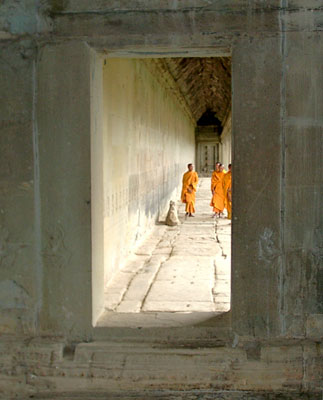 Monks inside the colonnade in Angkor Wat

After Bayon and it's environs, we headed back to the guesthouse for lunch and a rest. Cambodians seem to take a "siesta" much like most of Europe and Latin America, from about noon to 3 PM. This, of course, keeps most people out of the searing mid-day heat and allows for the all-important afternoon nap. This means though, that banks and shops close in the middle of the day as well. The only thing open are the restaurants. We headed down the street to one of the area's better known restaurants, The Bayon (on Wat Bo Rd.), where we'd heard that they serve traditional Khmer cuisine in a nice setting. The restaurant turned out to be two stories high set around a central courtyard. We  were seated on the open air verandah and given menus. We were the only people there for lunch for the first half hour. By the time we left only 2 other tables had filled. Low season, I guess.
I ordered chicken curry served in a coconut and fresh coconut juice. I didn't realize I'd have two large coconuts sitting on the table in front of me-it was a bit of overkill. The coconut juice was a bit disappointing. It was, of course, very fresh, having been just opened, but it was also very warm and not thirst quenching or refreshing on the hot day. David had wanted pizza (who knows why?) but their pizza oven was not ready so he ordered beef noodle dish. Both dishes were very mild, without a hit of the fiery chilies of Thailand.
After our meal, we headed back to the room to enjoy some air-conditioned, mid afternoon slumber. Of course, we awoke a bit late, and Ponheary and our driver were outside waiting to take us to our destination for the afternoon; Angkor Wat.

Above, the 500 Riel note, worth about 12 cents.
Even it has a picture of Angkor Wat on it.


This being the rainy season, as soon as we got in the car, the downpour started as we drove toward the temple. I was a bit concerned, but when we got out of the car, the driver pulled out giant black umbrellas from the trunk and handed each of us one.
Stopping outside the moat to admire the temple from a distance, Ponheary told us the first details. Before we even crossed the causeway, we were asked to show our temple passes, ID's dutifully checked. Walking across in the rain, with the heat emanating off the stones, it was hotter under the umbrella than not. Unfortunately, without the umbrella, we'd be drenched in seconds. Which would you choose? 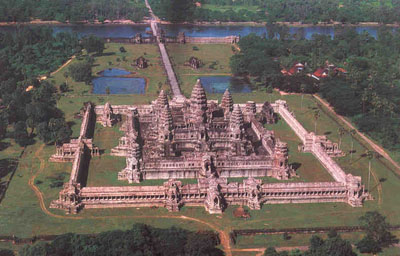 This scan of a postcard show the grand size of the complex.
Near the top is the exterior moat and causeway.
In the center are the smaller ponds which are shown reflecting
the temple in many photos (including our own).

Before we got here I had no idea how the temple was laid out. I always assumed it was one big building but it's not; imagine it like an onion with layers inside layers. Angkor is an enormous complex and the photos from the outside do not do it justice.
First, there is a moat surrounding the entire complex, about a kilometer on each side of the square. Once you cross the causeway, you reach the outer walls, complete with carvings. 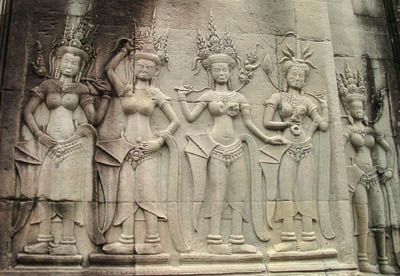 Inside the outer walls is a large grassy area where there are smaller buildings that look like temples but are in fact ancient libraries. One walks along another center causeway between the libraries toward the main temple itself. In front is another lake/moat. 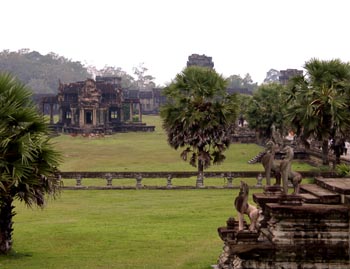 The exterior of the temple is a covered colonnade on which every surface has some sort of carving from simple decorative detail, to elaborate stories of battles and Khmer history spanning the entire length of the building. Ponheary explained that parts of the temple, which took over 30 years to build were never completed. After the king died, the work just stopped. Towards the back, it is possible to see unfinished carvings. A clear example of this can be see in the apsara carvings below in various stages of completion. 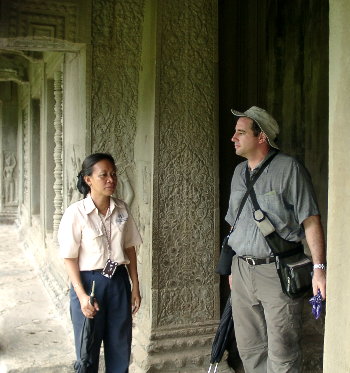 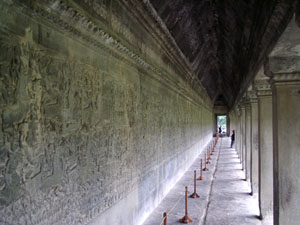 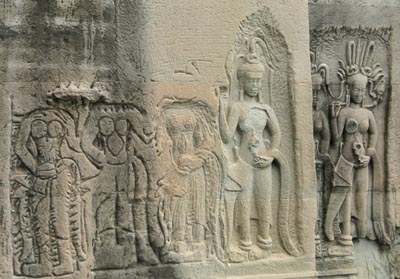 Inside the temple entrance, up a steep flight of steps is yet another courtyard with interior temple. 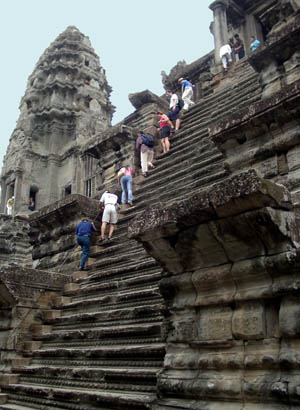 This one has even steeper, vertigo inducing steps that lead to the center of the temple. We had our choice of stairs to go up, but everyone comes down the same way; on the side with the railing and extra steps added (see photo). Coming down is not easy or fun for most people, in fact, it seemed like many suffered from vertigo and it took them ages to make it down.

Once at the top, you can continue to climb around and explore and are offered expansive views of the surrounding area. There is even a smaller central courtyard in the very top of the temple. There are small Buddha statues inside draped in the fabric of the saffron colored monk's robes. Each has an attendant, an elder Buddhist nun usually, who will offer you incense to light and say a prayer. You are expected to leave a small donation on a plate nearby.
The temple closes at sunset and soon we were being ushered off the top by guards, anxious to get everyone out by closing time. 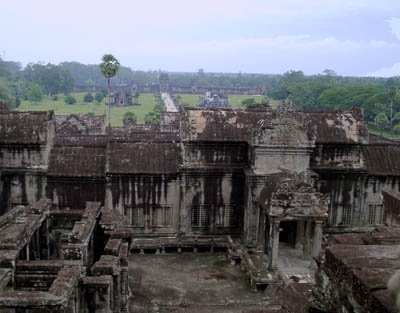 That evening we had dinner across the street from our guesthouse at the Chaing Mai Thai restaurant. We had crispy spring rolls, a very good tofu curry, pad thai noodles, rice and two large Angkor Beers for $7.30, a good value. Exhausted, we were in bed by 9 PM.