Can I die easy now?

My Dinner with Bocuse:

Restaurant Paul Bocuse is in the book "1000 Places to See Before You Die".  Hailing from a family which has been running restaurants since 1767, Bocuse has run his eponymous restaurant since 1965. According to the article about him on the back of his menu, the restaurant sits below the house belonging to his family. In fact, it is said he has slept in the same bed in that house since the day he was born. That's not to say he hasn't traveled all over the world, spreading the gospel of French cuisine. He's the first chef to ever be given the Legion of Honor and is considered a national treasure. He's considered to be one of the forefathers of nouvelle cuisine which he helped to pioneer in the early 1970's. Bocuse has maintained his Michelin 3 star status for over 30 years now, longer than anyone else. If Lyon is considered to be the gastronomic center of France, then Bocuse is at its' epicenter, along with his four other brassieres, radiating out from the star, appropriately titled, Le Nord (North), Le Sud (South), L'Est (East), and L'Ouest (West). 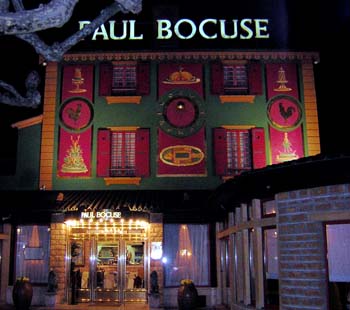 It's about a 20 minute drive from Lyon to Bocuse. It took us a bit longer due to one way roads and a little confusion, but we still arrived on time. The restaurant sits alongside the Soane river and it's impossible to miss; there's no shortage of signs pointing the way and bright lights illuminate an an even brighter red, green and gold painted building with "PAUL BOCUSE" in neon above. Lest this sound garish, let me say, it is, but it's somehow not insulting. We pulled into the parking lot and a red uniformed valet opened our doors and let us through the courtyard to the front entrance. The courtyard walls are covered in murals from Bocuse's life and family business (food!). 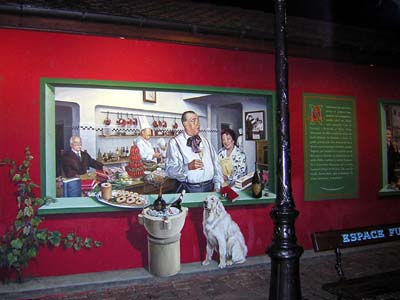 The interior of the restaurant is about as over-the-top as one would expect from a 3 star place. Edges are guilded, there are silver candelabras on every table, exquisite fine china and crystal, and everywhere, Bocuse's name and likeness. There's even a photo of him shaking hands with President Clinton near the ladies' room. I believe there were at least three people serving our table. At this point, I have to admit I still wasn't feeling well, and was a bit overwhelmed by the attention and the surroundings. We were given the menu, a huge, heavy papered thing, with an insert containing two of the three set menus and some "suggested" wines. I never saw a formal wine list. I really wanted to take some photos and I noticed that another guest had a camera so I took my camera out and set it on the table. 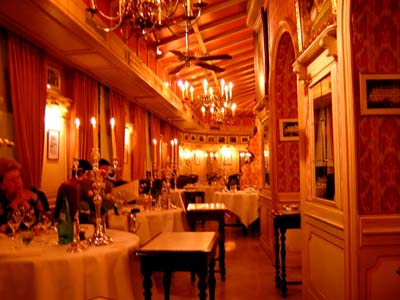 Just then, I looked up, and there was the man himself, coming to personally greet each table. He was much shorter and older then I expected (he must be close to 80 by now), but he still maintains a grand presence. However, as intimidated as I was by his legacy, I found him to be very warm, almost granderfatherly. Tracy spoke to him (in French) and told him I was a chef. Bocuse brightened, took my hand and then noticed the camera. He asked if we wanted to take a photo with him. Of course! And with the practiced ease of one who does this a lot, he called over the captain and had him take not one, but three photos of us, all together and just him and me. And then just as fast, he was gone. 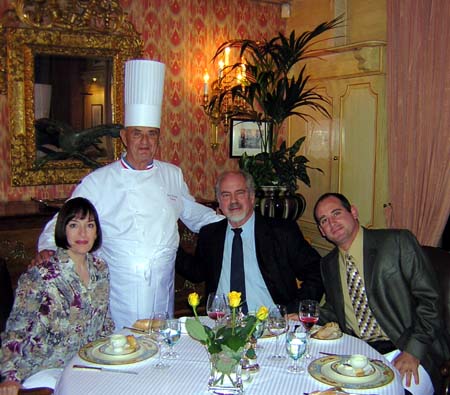 A few minutes later, the server came back and asked me to print my name so Bocuse could sign a menu for me. When he returned with the menu, he asked if I'd like to see the kitchen. Ya think??? In a flash, I was back in the kitchen, and they were clearing off the counter where the food goes out. Bocuse introduced me to his head chef, we all moved behind the counter, they took photos as if I was a visiting dignitary, and then I was whisked back to my table. I had barely a moment to look around the kitchen, but here's what I noticed; it's so clean you could eat off the floor, it's quiet, there were maybe 10 cooks for the 40 or so dinners they would do that evening, there was very little food out and visible (no mis en place), and finally, I think the cooks were as curious about me as I was of them. Perhaps they don't see to many female chefs there still? As far as I could tell, I was the only guest honored that evening with a kitchen visit. 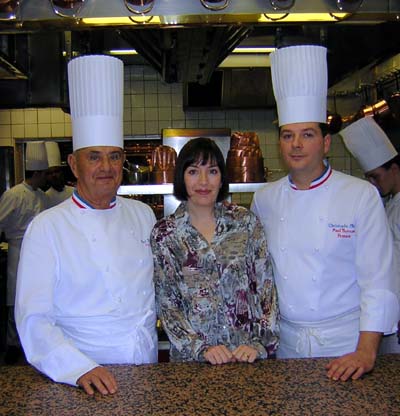 In the restaurant, the menus are in French, but the staff is multi-lingual and will assist with translation. The menus are also available in English on his web site (see link above) and I've copied them here, along with a few changes.

Below is the menu I had, with my selections in red.

Duck dodine garnished with truffles and pistachio
and home made duck foie gras
or
Lobster cassolette à l’Armoricaine
Sea bass in puff pastry (from 2 people)
or
Fricassee of chicken from Bresse region in a light creamy sauce with morel
or
Lamb rack roasted with a flower of thyme
or
Fillet of beef à la Périgourdine, freshness potatoes
Selection of soft white and mature cheeses « Mère Richard »
Délices et gourmandises

David and Tracy selected from the menu below:


We also had a bottle of 2001 Baux de Provence "Coin Cache"-Mas de la Dame and Tracy and David had pre-dinner aperitifs and after dinner coffee.

I was immensely impressed with the service. Everything was done table side, from the mixing of drinks to filleting the lamb and veal, to an immense cheese and desert selection. The service was attentive, but not overbearing. I watched them serve the sea bass en croute to our neighboring table in a seamless effort that had the fish deboned and sauced, still steaming on the plate along with a piece of the beautiful pastry all within 2 minutes. It was a well practiced dance. 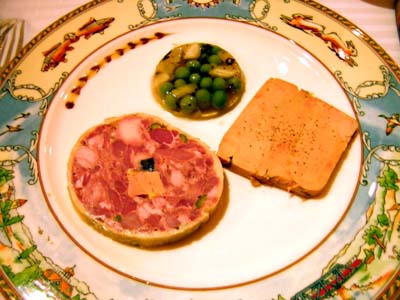 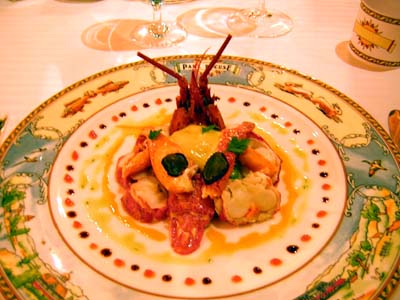 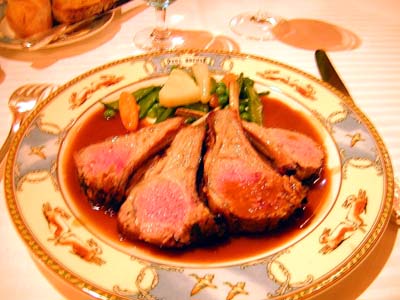 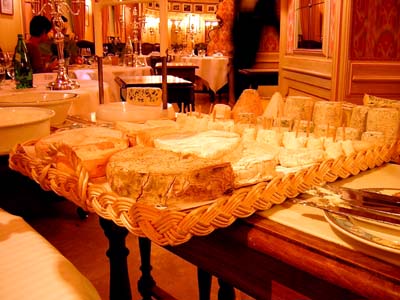 As for the food, I think I could sum it up in one word; perfection. The kitchen seems to strive for the best of everything. There was an aspic served with my fois gras that contained peas. These peas were perfectly cooked, five seconds either way and they would have been wrong. My lamb was just as I asked, a beautiful medium rare and was juicy and tender. The portion sizes were larger than I expected (or hoped, given how I was feeling). Fortunately, David has a bottomless pit for a stomach, so he was able to finish what I could not. The cheese tray was truly huge, and I wished for a second stomach so I could taste more. By the time I got to the dessert course, I could barely fathom of eating more, so I just had some fresh fruit. But again, those had to be the most perfect raspberries I've ever had. Unfortunately, I can't remember the names of the cheeses, or the deserts David and Tracy selected, but suffice it to say, they were all wonderful.

Before we left, I walked back to the ladies' room and past the kitchen entrance. It was only 10 PM, but the kitchen was spotless, and empty, all the cooks had long since left. All in all, it was a wonderful experience. My only regret was not being able to eat more, and thus, enjoy the food portion of the experience more. Just another reason to go back, I guess.