Up early and breakfast at the Cheese Sandwich restaurant. The car was on time and we left Siem Reap at 8:30 after a stop at the bank to change Traveler's checks-always a hassle. How many bank bureaucrats does it take to change a traveler's check?

The first 10 miles the road was beautiful, paved and smooth and we averaged 60-70 MPH. Then, suddenly, the paved road ended and we were on dirt. After that, for the next 4-5 hours, the road was either horrible with giant pot holes or smooth, graded dirt. Fortunately, it did not rain during the trip otherwise we would have been in trouble. As it was, we did not stop any any of the places Ponheary had recommended and we arrived in Phnom Penh around 2:30 PM, six hours after we left. I didn't even take any photos, sorry. We only stopped once, for a bathroom break, not even for food.

Our introduction to Phnom Penh was not a good one; the city does not make a good first impression. I really wanted to like this city; it is much maligned and I tend to like places others do not; Bangkok, Katmandu, Palermo. I can usually find their redeeming value. Here, I am having a hard time.

We entered the city over the Japanese Friendship Bridge and we had told our driver that we wanted to go to the California Guesthouse, one I had read about online. When we got off the bridge, we pulled over and were met by his "cousin" on motorbike who would guide us where we wanted to go. I got the impression that the driver did not know his way around since he was not from there. As we drove down the street along the river I was appalled at the poor condition of the buildings and the general sinister feeling in the air. I'm sure this all sounds silly to many people who spend time in Phnom Penh, but let me tell you, at that moment, I was very intimidated by the place. And, as I said above, big cities don't tend to easily scare me.

We pulled up in front of "California 2" and thought we were in the wrong place. Where was the California 1? Before we could get out of the car, we were accosted by hotel touts, vying to "guide us into the hotel for their commission. We thought we were in the wrong place, so the cousin offered to show us the way there and suddenly we were off in the opposite direction away from the river. But that wasn't right either, since I knew we were supposed to be right on the river. We stopped the driver and made him turn around. We decided to look at the Sunshine guesthouse and we shown a dingy room that smelled of mold for $25 with a view through barred windows out onto the river. On another day, when not hungry, hot, tired, and irritable, it might have been acceptable. On this day, it was not, and on any day, it was probably overpriced.

At this point, we agreed that we would look at a few more, and if we couldn't find anything quickly, we'd go to a "nicer" hotel. We went back to the California 2 and were shown the only room they had left; on the 4th floor in the back, again with a overwhelming smell of mold, and a grand view of the fire escape. Did I mention the bed that was as hard as brick?

Our last stop was the Riverside hotel which turned out to be too far from where we wanted to be and looked like a Chinese businessman's hotel (hard to explain if you've never stayed in one). Veto.

Dave invoked the credit card rule; as in, "we have one, let's use it". We headed for the Sofitel Cambodiana. We 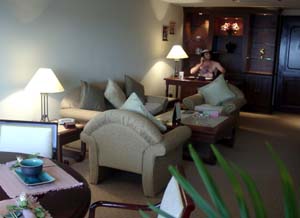 walked into the calm oasis of the lobby and approached the smiling woman behind the front desk. She frowned when we told her we did not have reservations, nor were we with a "company" here in Phnom Penh. On our own, she could only offer us the "rack rate" of $200 per night. Then she offered us a discount, $114 per night, incl. breakfast. Sold. We asked to see a room. After she checked, she discovered that the rooms she thought she had were unavailable, but she could give us a junior suite for $120 a night. Ok..... let's see that room. When we got up to the room, the phone was ringing. The nice girl who showed us up to the room answered the phone as we checked out the room which had turned out to be a full 2 room suite with living room, two TV's, and a sweeping view of the river! As we went back downstairs the girl told us that the front desk had called and said that she had mis-quoted the room and it should have been $180 a night (rack rate $280) but she had called her supervisor and gotten us an upgrade to keep the price at $120. Excellent.

Note: I got a lot of flack for posting about this on a message board later. The guy could not understand why I would pay $120 a night when there were rooms down the street for $10. My answer, because I can. Why suffer? Life is too short, and certainly so is my vacation. I have a job and I can afford a nice hotel. It doesn't make me any more of a "tourist" than the so-called "travelers" that ensconce themselves in the tourist ghettos of foreign cities and never leave. So what if I have a nice room to go back to at night? Who needs mold and bedbugs? Ok, rant over.

First thing first, we were starving and we ordered room service! For $21 we got tomato soup, penne with pesto, and a club sandwich with fries all tasty and delivered hot to the door. It was so much food we didn't even eat dinner later that night. Try getting even a sandwich from room service for $20 in any nice hotel in the US. 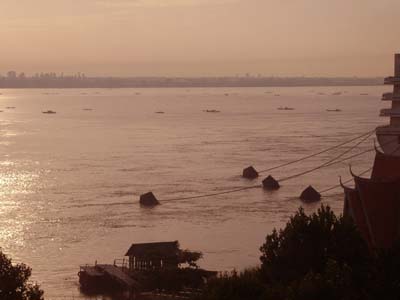 Full and in much better spirits, we took a rest and then walked down to the river front area filled with hotels and restaurants. We went upstairs to the FCC, a restaurant modeled on a Foreign Correspondent's Club though I'm not sure if it ever actually was one. We sat at a counter overlooking the river front and took in the view. Families were strolling the promenade, teenagers cruising on their "motos" checking each other out and vendors were cooking up whatever was on offer that night on portable grills. Things were suddenly looking a lot calmer. After a couple of drinks and a game of pool, we went back to the hotel and to bed.