Saturday-
We awoke at the ungodly hour of 3:30 A.M. to make our 6 A.M. flight to Chicago on United. Since we'd checked in online the night before and only had carry-on luggage the flight went off without a hitch. When checking in online, we'd been offered the opportunity to upgrade to economy-plus and the extra 5 inches of legroom was well worth it.

On arrival at O'Hare we found the Blue Train to the city. At the terminal in the airport we bought 3-day transit passes, good for unlimited rides on both the subway (the "El") and the city busses for $12 per person. The trip into the city took about an hour, including one transfer and a 3 block walk to the hotel.

I'd booked the hotel on Priceline because for some reason that weekend was absurdly expensive for hotels. I won the Chicago Intercontinental, which turned out to have a fantastic location right on Michigan Avenue at the start of the Magnificent Mile. I was a little concerned because with Priceline, you never know what type of room you will get, but we got a decent corner room in the new wing with a view toward the Lake. 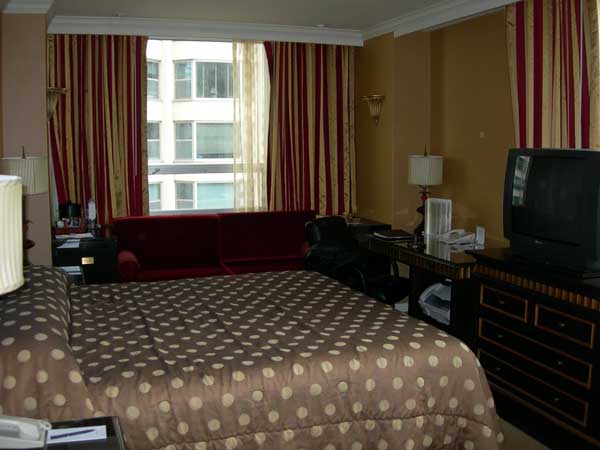 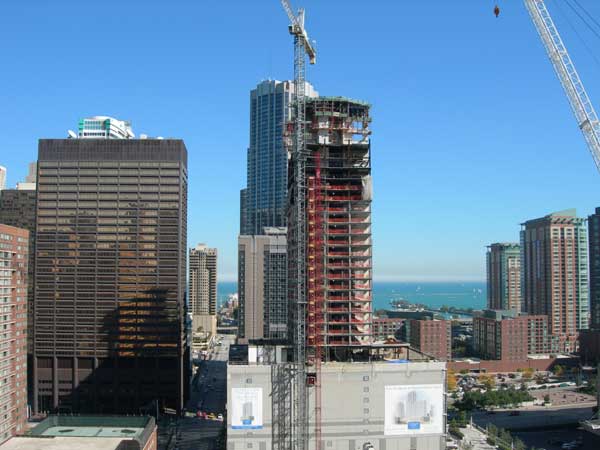 We were famished, so we headed out for some lunch and wound up at Quartino's, an Italian place a few blocks from the hotel. I'd heard good things about their "small plates" and various items from their "salumeria". The menu was a bit of a disappointment however and it wasn't until we were almost finished that we discovered that those items were only promoted at dinner. No wonder we couldn't find them on the menu!

Next we head out to Evanston on the train to visit with David's sister Anise, her husband Adam and their brand new baby, McLevy. Below is Uncle David with nephew McLevy.  We had yummy stuffed pizza delivered and enjoyed the evening with family. 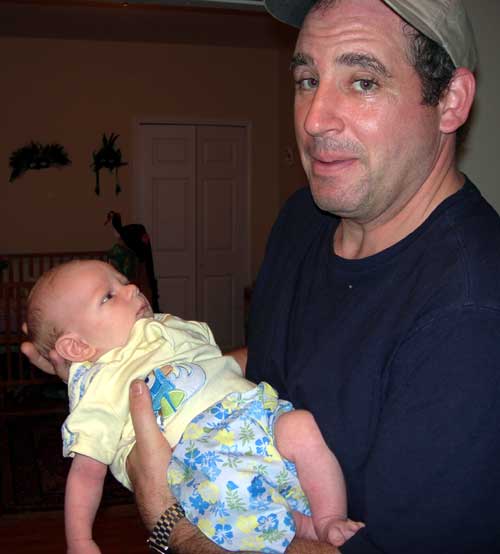 After we got back to the hotel we walked up the street to the Park Hyatt Hotel (right in front of the Water Tower) and had a drink in the bar of their NoMi Restaurant. This was quite the happenin' place, filled with local 20-somethings and we felt a bit under-dressed but had a nice time nonetheless.  We ended the night with a late night foray into the Ghirardelli store for ice cream and chocolates to go.


Sunday-
In the morning we went out in search of breakfast. We wandered into the mall across the street from the hotel and I asked the security guards for a recommendation. They directed us to a diner back across the street and down below on Grand Ave called "Mary's". It was great, and packed with locals. While waiting outside for a table I read in one the the reviews posted in the windows that they served grits and are one of the only places in Chicago to do so. Of course I had to order them, and got them substituted for my hash browns. They were yummy and breakfast was under $20 for the two of us. Mary's Cafe, 215 East Grand Avenue, 312-377-2500 open every day 6am-3pm. 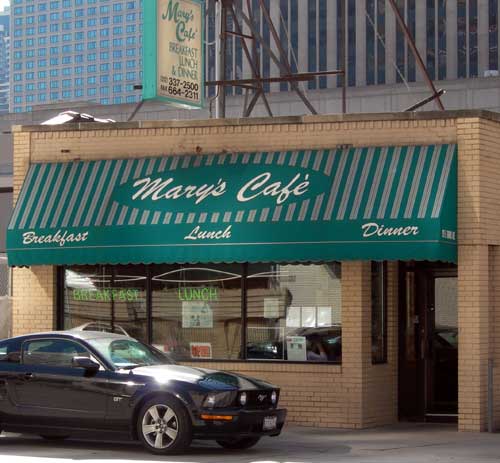 After breakfast we took a walk down to Millennium Park. On the way, we passed the Tribune Building with it's cool building connector and walked over the bridge where the river tours depart (below).  In the park, we checked out some of the botanical gardens, the Gehry designed music pavilion, and a large stainless steel sculpture some have called "the egg" (see photos below).

Next, we walked over The Art Institute of Chicago, which is right next to the park and spent hours in there wandering the amazing exhibits. Besides the regular showpieces like American Gothic and A Sunday on La Grande Jatte, we saw some really neat miniature rooms down in the basement, cool medieval armor, and a disturbing, yet at the same time fascinating, photography exhibit called So the Story Goes. By the time we left we were starving so we grabbed a quick sandwich across the street from the museum. 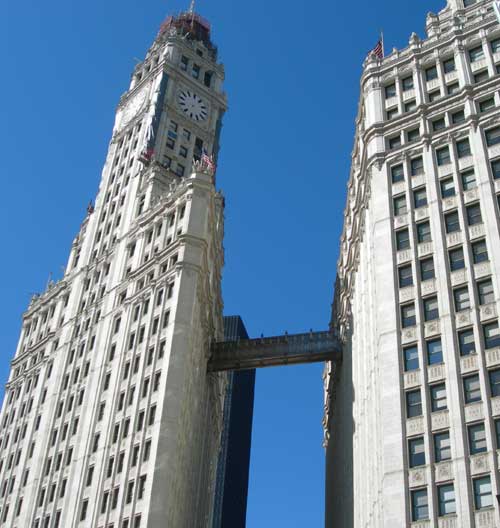 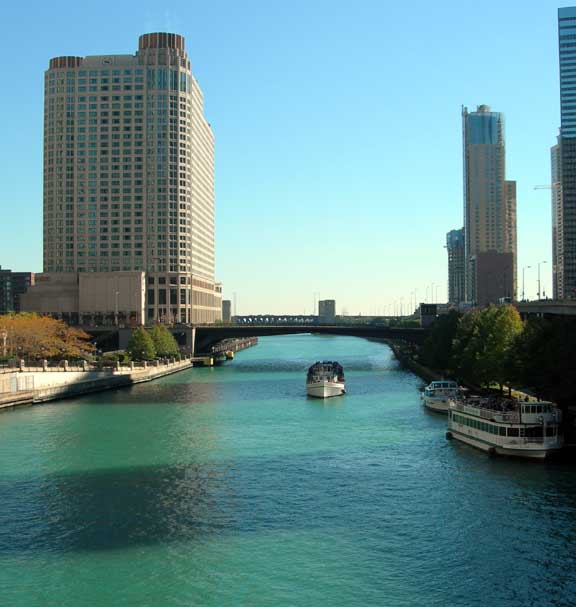 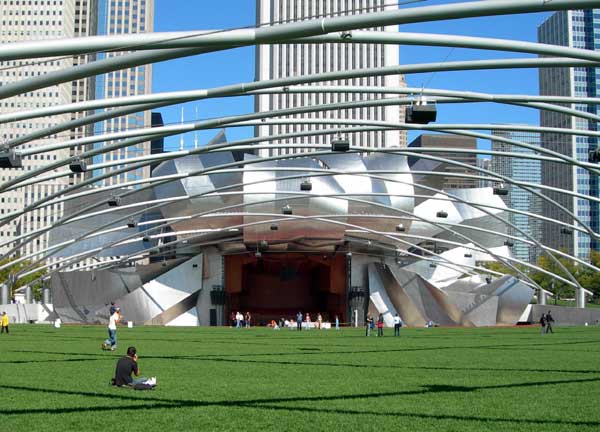 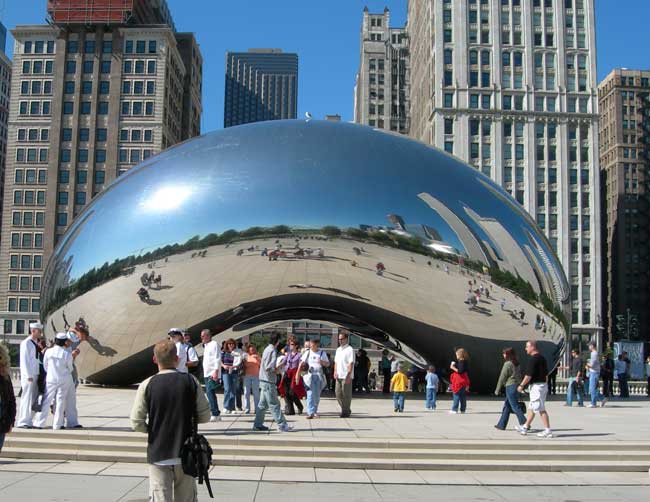 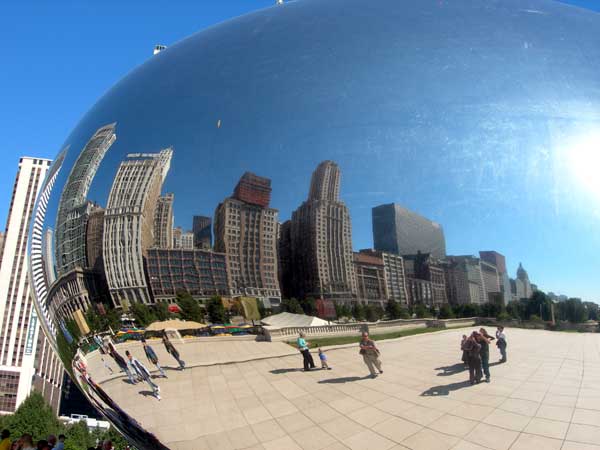 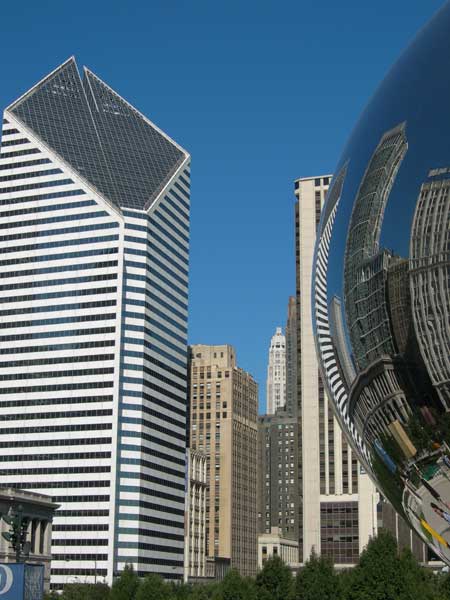 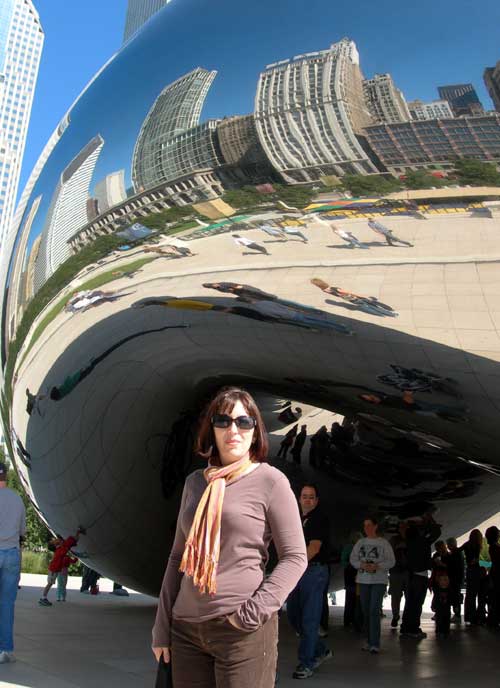 Our plan for the late afternoon was to meet up with Anise and Adam to do the Chicago Architecture Foundation's River Cruise. The cruise departs right where Michigan Avenue crosses the Chicago river, only a block from our hotel. We ended up on the last 5:30 PM departure on the "summer" schedule and the tour was fantastic. It lasted 90 minutes, began in full sun and ended at sunset. The boat was only half full and the docent was incredibly informative and held our interest the entire time. Highly recommended. 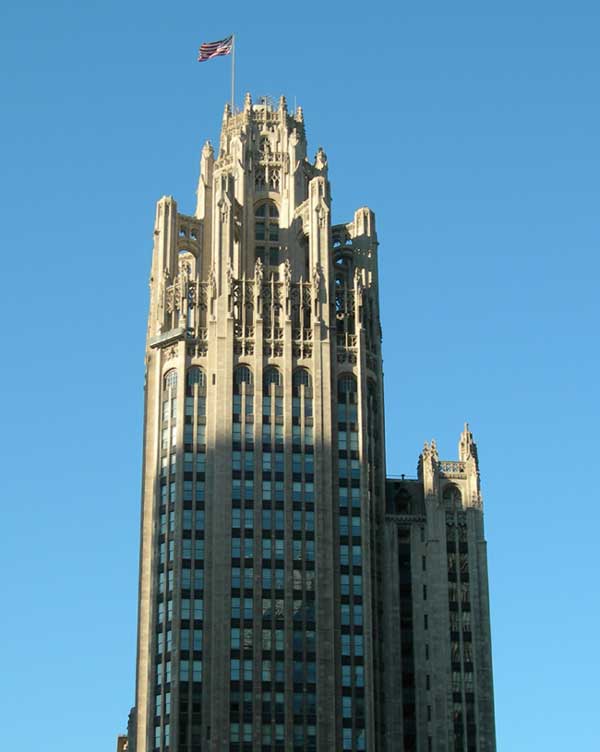 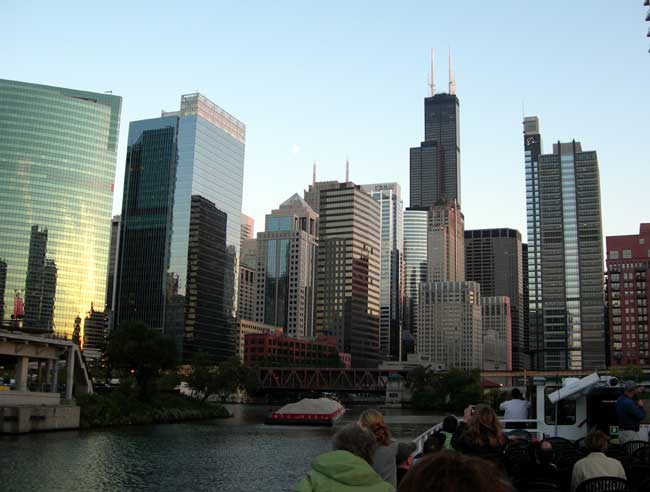 Below, Marina City, 1964, apartments with rounded balconies.
Love them, they remind me of Bangkok. 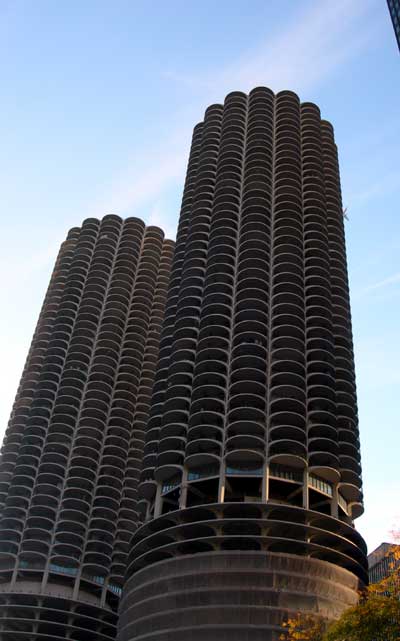 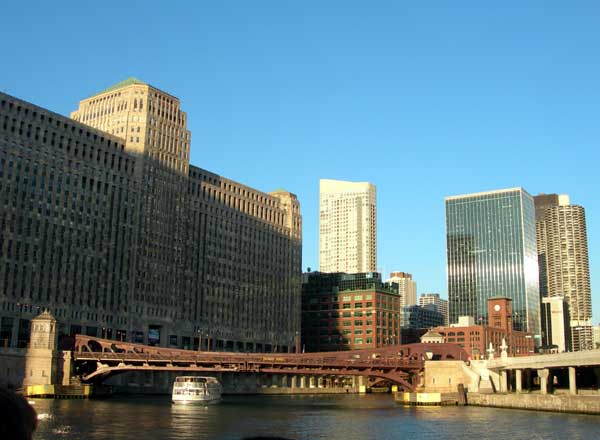 Below, the Sears Tower. 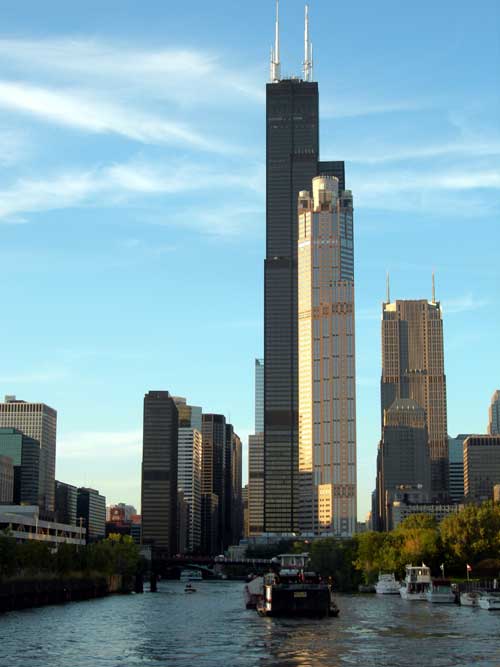 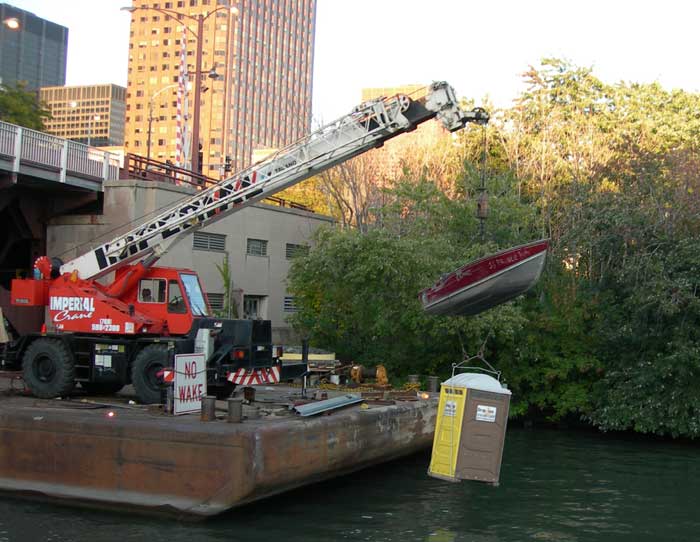 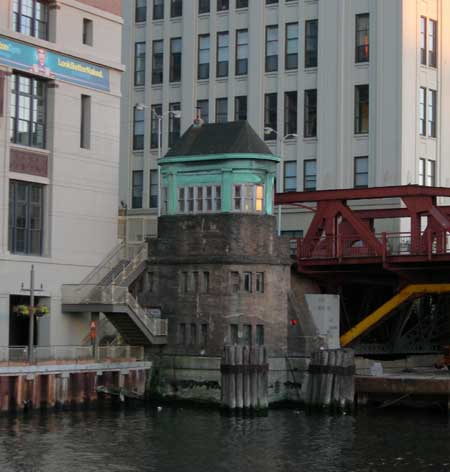 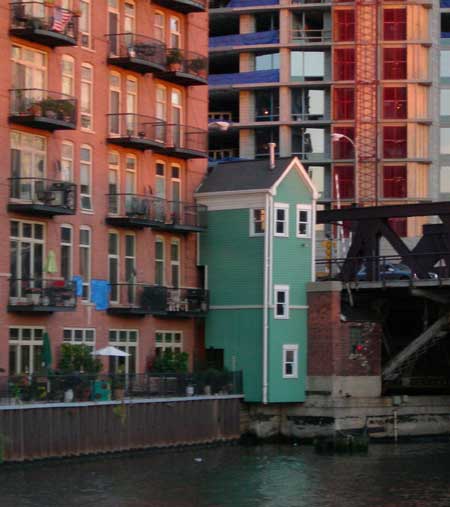 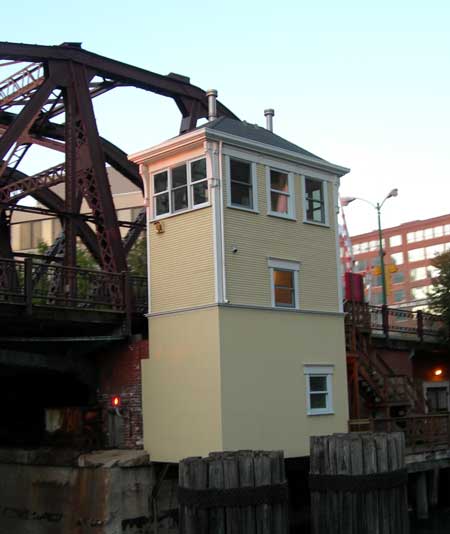 The newest line on the "El", the Pink line. 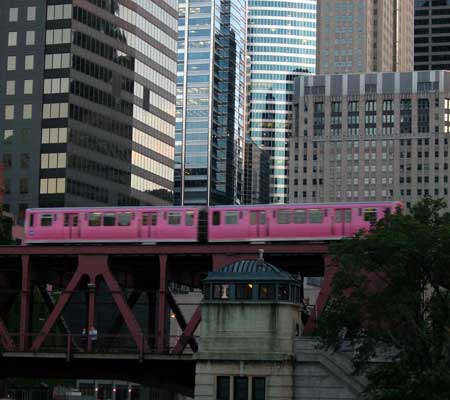 Adam, Anise and McLevy on the boat. 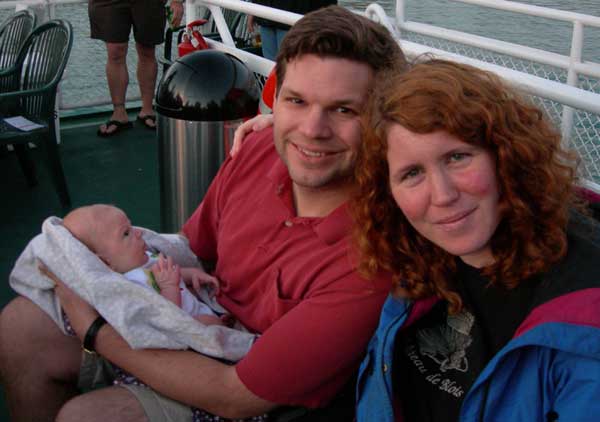 Even though it was my birthday, we left our dinner plans open for that evening. We contemplated many of the steak houses for which Chicago is famous, but in the end we wound up at an old favorite, Bin 36.
We each enjoyed a wonderful wine flight with dinner; for me, it was the "Sexy Reds" flight and for David the "Reigning Reds of Spain". I really like how they present the wine flight on a rectangular mat with the names and descriptions of each of the four 2 oz. tastes of wine. For the meal, I had a mushroom confit with fois gras appetizer and Oven Roasted Duck with pumpkin-pancetta risotto for my entree.  David had the smoked fish plate and Grilled Hanger steak with white truffle mac & goat cheese.  All the food was very good, but the restaurant is really all about the wine. It's a fun and affordable way to try a few good wines without drinking too much. Bin 36 also has a HUGE cheese selection and offers "cheese flights".

Monday-
Since our flight did not leave until late afternoon, we asked for and got a late checkout from the hotel. We took the bus down to The Field Museum to discover it was one of their free Mondays. This is a fantastic Natural History museum and it was packed with school kids. We didn't have time to see the special King Tut exhibit, but we did get to check out the fascinating and sobering "Evolving Planet" exhibit. And of course, there is always the famous dino, Sue (see below). 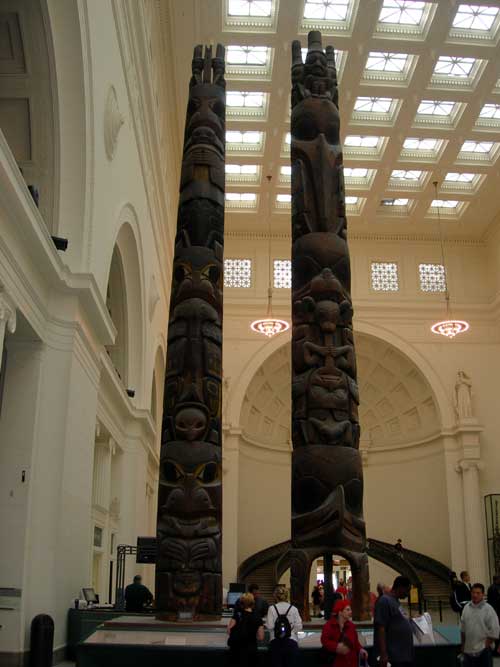 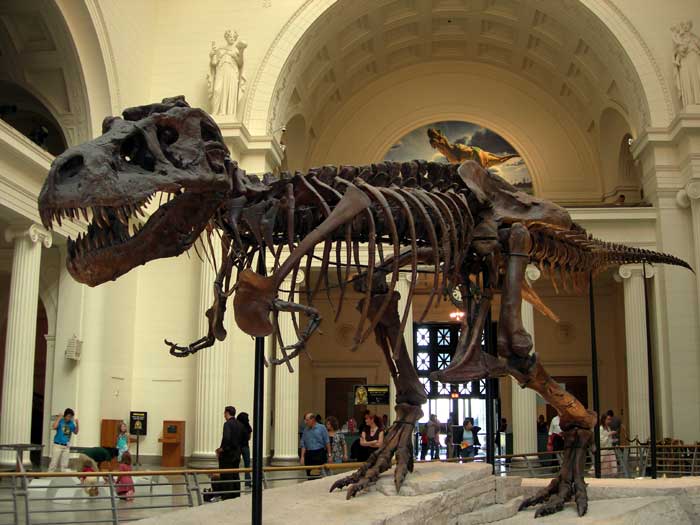 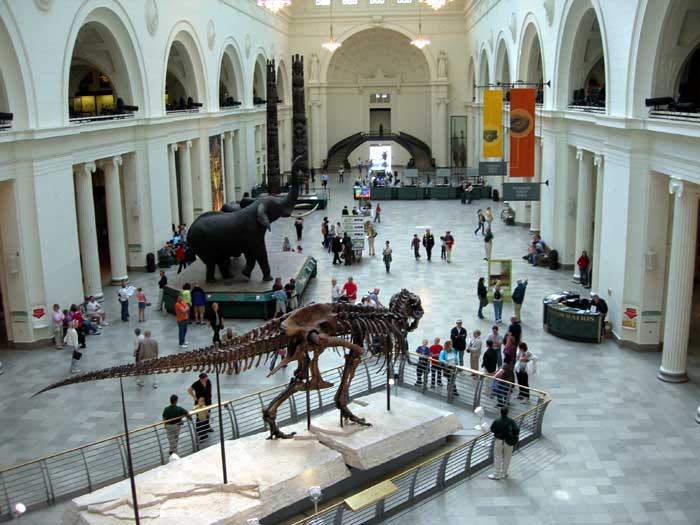 Before leaving Chicago, we met up again with Anise and Adam and had a very nice lunch in the hotel's restaurant, Zest. We took the train back to the airport and flew home.